How The NBA Got Its Groove Back 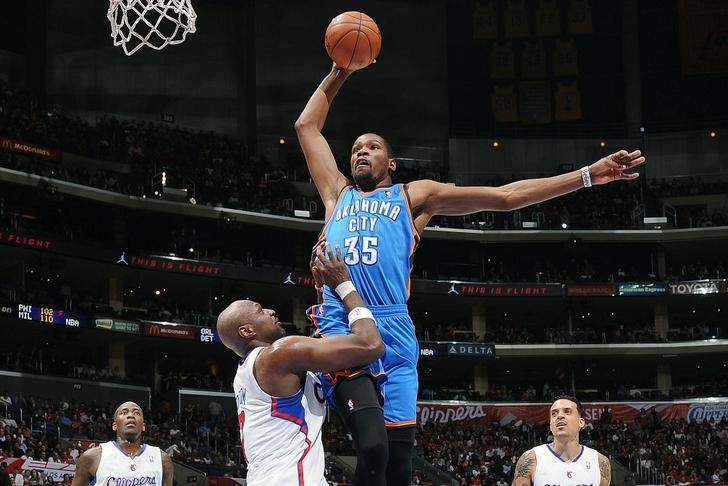 The NBA has been looking up to the NFL for decades. Yet, as the NFL continues to make everything remotely fun about the game a fineable offense, the NBA is simply getting it right.

Baseball shoots itself in the foot over and over and over again with mishandling both its stars and the controversies which surround them. Hockey's lockout fetish may not have crippled the sport, but the intensely regional nature of the game and its marketing makes it hard to draw any overarching conclusions about how the sport affects us as a sport-loving community.

And then there's the NBA.

Never you mind that two of the five players featured in this commercial are injured, and therefore unable to participate in the NBA's annual Christmas showcase. Never you mind that the early game of our amazing quintuple-header of games today featured two injury-riddled "shoulda been" Eastern Conference mega-contenders.

The very fact that, prior to the season, the NBA slotted five games pitting ten very interesting (albeit interesting for differing reasons) teams against each other, and made it so that the schedule just bleeds from game to game to game to game to game, with no break...they have absolutely figured out a way to keep our eyes glued to our television sets, and away from you know...

(Hold on. After shuddering through this video, Dwyane Wade just fed the Artist Simply Known as King a ball of the glass, and all the Artist did was use his OFF HAND to bring it down for the dunk. C'mon...HE HAD TO MOVE HIS HEAD MID-DUNK IN ORDER TO NOT DECAPITATE HIMSELF)

The aside that I just wrote in the middle of a coherent thought is the main reason why the NBA is making money despite itself, and is perhaps the premiere example of a U.S. major four sport finding and building an international fanbase...

This game is built for the YouTube generation. It is built to talk about over drinks, at the water cooler, on message boards, on Facebook, Twitter, Facetime...what the hell ever.

The game is built for us. It has morphed and mutated throughout the years, and aside from the beginnings of the post-Jordan era, has grown alongside us.

In a game where having a top-ten star means more than any other sport, and where talent discrepancies show themselves in spectacular and sometimes humiliating ways, every last move or non-move, pass or non-pass, shot or non-shot matters.

Also, the very cozy and camera-friendly presentation of the game means that we get to assess our heroes and goats from all angles, meaning that if your are a Minnesota Timberwolves, an Atlanta Hawks fan, or even a Utah Jazz fan, that you have the ability to really, truly, utterly know every tic and hitch in every player's game on your squad.

The NBA knows this.

They market their stars in such a way, both nationally and regionally, that each player's uniqueness has a chance to shine both through their game and through media promotional platforms. For every Bryant, Durant, and Artist of the world...there is a Damien Lillard...

or even a Gordon Hayward to get excited about.

So, while the other three major sports trip themselves up in their attempts at grabbing the dollars from your paycheck, the NBA smoothly and stylishly gives us what we want.

Now if you excuse me, there are about seven hours of basketball left.

The ten worst scrooges in sports