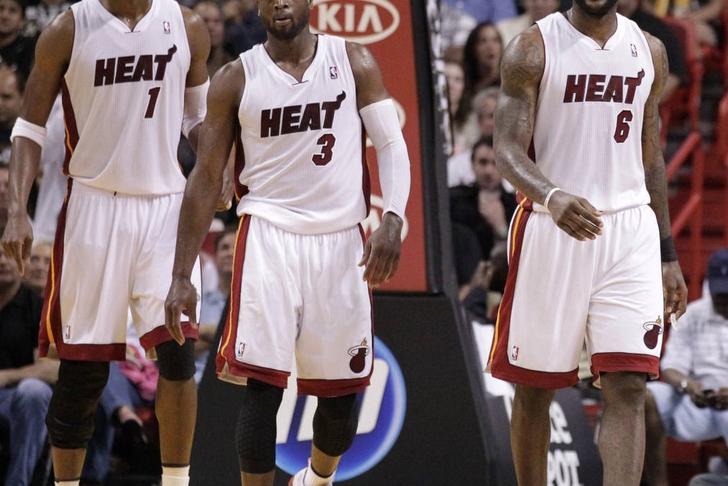 Another year, another season with the Heat near the top of the Eastern Conference.

The regular season has essentially become a formality in Miami since the Big 3 showed up, but this is really the first year there have been legitimate threats to the Heat's reign.

For one, there's those pesky Pacers, who stole the top seed in the East. Then there's the fact that LeBron James might not be the best basketball player on Earth anymore (at least in the eyes of MVP voters) thanks to Kevin Durant. Oh yeah, and there's Dwyane Wade talking about how the Heat might look a little bit different next year.

Not that this Heat team isn't used to a little adversity—the past few years have been nothing but, really.

But for LeBron & Co. to get back to the promised land, they're going to have to fight history.

Since Bill Russell's Celtics made 10 straight Finals, only Magic's Lakers (1982-85) and Bird's Celtics (1984-87) have made four straight finals appearances, as the Heat are trying to do.

Now, the Heat may be the best team over a four-year period since that time (Jordan's Bulls would've earned that distinction if not for the whole baseball thing), so if anyone can do it, it's probably them.

Miami knows what they're going to get from LeBron every night, and Chris Bosh has been one of the most consistent players in the league this year. Wade has also been effective—when he's been healthy.

He's still had a solid season (19.2 ppg, 4.8 apg, 4.6 rpg), but he's missed a good chunk of time this year. That can be chalked up to rest and head coach Erik Spoelstra wanting to save him for the playoffs, but the bigger issue is Wade's knees.

Those have been what's failed him over the last few years when he's been hurt, and if he can't play like his normal self, this Miami team isn't the same. They need him to be healthy if they're going to make this three-peat happen.

When he's on the court and doesn't have any health issues to worry about, he's still one of the best players in the game and takes the Heat to a different level. When's he's hurting, he becomes an average player who takes more shots than an average player should (because he's actually not an average player), and can become a detriment to Miami.

Everyone in the East other than Indiana

Let's look at the other playoff teams in the East, shall we?

Charlotte Bobcats - Really? They're the Bobcats.

Washington Wizards - John Wall might win one game in a series with Miami.

And that's it. There's a reason everyone's been looking forward to a Miami-Indiana rematch in the Eastern Conference Finals.

The Pacers have built their entire team to be the ultimate foil to the Heat. Miami ranks dead last in the league in rebounding (you knew they weren't big but didn't know it was that bad, did you? They're worse than the Sixers!), and Indiana has loaded their roster with all sorts of unnecessary big guys—we're looking at you, Andrew Bynum.

In all seriousness, having three effective, legitimate seven-footers in Bynum, Roy Hibbert, and Ian Mahinmi, along with someone who can match LeBron as well as anyone on both ends of the floor (Paul George) makes Indiana a major problem for Miami.

Miami sweeps through the first two rounds without breaking a sweat. Indiana doesn't break out of their funk and limps into the conference finals off of a surprisingly awesome seven-game series with the Raptors or Nets. The Heat take advantage and beat the Pacers in five or six games, staying fresh (and healthy) for the Finals. Whoever wins the West is so beat up they don't pose much of a threat, and we have ourselves a Heat Three-Peat.

No one on the heat can handle Al Jefferson in the post for Charlotte, and the Bobcats make things a lot tougher than they should before losing to Miami. Next up is Chicago, who steals two games, and Dwyane Wade gets hurt when Joakim Noah smacks him upside the head on a dunk attempt (every Heat fan's worst nightmare). They limp into the conference finals to face an Indiana team that turned things around, and the Heat lose in six games.

Miami will blow through the first round no matter who they play, and I think they will see Brooklyn in the second round after the Nets beat the Raptors. Every game in that series is close, but the Heat just have too much firepower and win in six games. Then comes the Indiana series, which is a total toss-up of a series. Home-court will matter in game seven, and that might be decided April 11 in the two teams' last regular season matchup. I have zero confidence in this pick—that's how much of a toss-up this series will really be—but I'm going to side with history here and say Indiana wins in seven and sends the Big 3 home.

Toronto Raptors - Can the Raptors challenge Indiana and Miami?