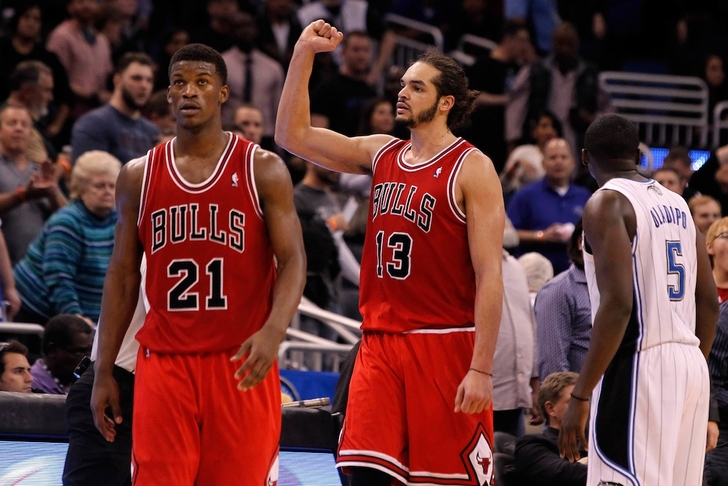 Lost to Washington in First Round (2-4)

The Bulls were hopeful that with Derrick Rose back in full health for the 2013-14 season, they'd be back to the top of the Eastern Conference. Rose did come back for a few games, but another injury sidelined him for the rest of the season - again.

All-Star Joakim Noah carried the Bulls to the fourth seed in the Eastern Conference, but they just didn't have enough firepower without Rose to do anything once they got there and were upset by the Washington Wizards in the first round.

Chicago has a great chance to get better through the draft with two top-20 picks. Whether they keep them or trade them to Minnesota as part of a package for Kevin Love remains to be seen, but they're valuable nonetheless.

The Bulls will bring 2011 first round pick Nikola Mirotic over from Spain, who has developed into a top-10 talent and they're counting on him to make a big rookie impact. Who else will they target in this draft to join him?

Both of Chicago's backup point guards to Derrick Rose (D.J. Augustin and Kirk Heinrich) are free agents, so the Bulls will likely look to Syracuse's Tyler Ennis with this pick. He's a smooth operator and a true point guard that defers to his teammates until it's time for him to take over. Ennis will make a good sixth man that can immediately play big minutes to take some pressure off Rose.

Chicago also needs to drastically improve their offense, so if Ennis is off the board, they'll go after T.J. Warren and Rodney Hood - two guys who have no problem putting up points.

Having Mirotic in the fold means Chicago can take a risk with this pick and maybe stash someone overseas. Forwards Clint Capela from Switzerland and Kristaps Porzingis from Latvia both have a lot of potential and will need a season or two before coming to the NBA. I think they'll go with Capela, who's a bit bigger and better defensively than Porzingis.

However, if Hood or Warren slide and are still on the board, they'll be hard to pass on.

This is where Chicago will look for some scoring help, and Tennessee's Jordan McRae will be their guy. He's a shooting guard with long arms and is great at attacking the rim, but his jumper is inconsistent and still needs some work.

If they decide to go with Hood or Warren with the 16th pick instead of Ennis, the Bulls would grab point guard Keith Appling from Michigan State. He's essentially a poor man's Tyler Ennis - great at running a team and solid defensively, but not very athletic or skilled offensively.

Who should the Bulls pick? Can they return to the top of the East? Tweet your thoughts to @brauf33.