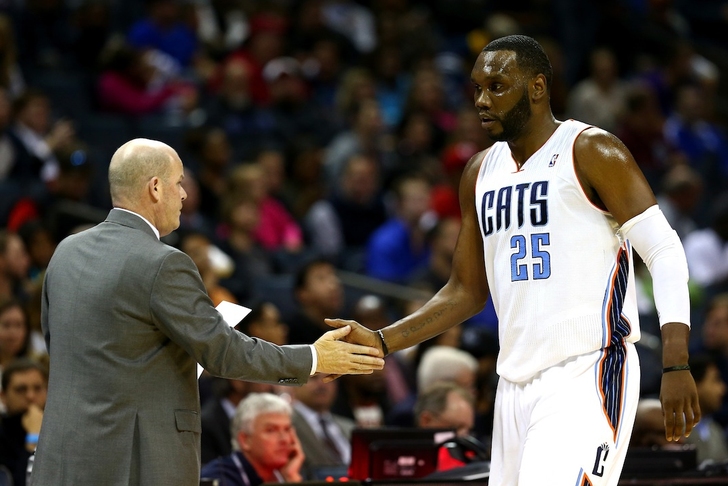 Lost to Miami in First Round of Playoffs (0-4)

The then-Bobcats made their first real free-agent splash since they came into the league by signing Al Jefferson to a 3-year, $41 million deal before his past season - the largest contract the franchise had ever given out. It proved worthwhile, too, as Jefferson made the All-NBA third team and helped carry Charlotte to the postseason.

Even though they were swept by Miami, Charlotte finally saw progress. First year head coach Steve Clifford had his team playing some of the best defense in the league and their young prospects started to come together.

Kemba Walker, Gerald Henderson, Michael Kidd-Gilchrist, and Josh McRoberts all proved to be very capable players, but Charlotte still needs a lot more to complement Jefferson to become contenders in the East. The Hornets have the cap space to make noise again in free agency (and they plan to be aggressive) along with three draft picks to do just that.

Charlotte's biggest need is for more scoring on the wing, and nobody in this draft can fill it up better than Doug McDermott. He finished his college career ranking as one of the top-5 scorers in NCAA history, including averaging about 27 ppg during this past season. Dougie McBuckets can fill it up from inside and out, and demonstrated at the combine that he's athletic enough to play small forward in the NBA - although he can still play the coveted small-ball power forward.

However, either McDermott would have to compete for playing time with the team's defensive star, Kidd-Gilchrist, or MKG would have to move over and play the two. If Charlotte doesn't want to do that, look for them to draft Michigan State's Gary Harris (two-way player) or Michigan's Nik Stauskus (outside sharpshooter) - the draft's two best shooting guards.

This pick will be where Charlotte should go after a two guard with the amount of depth the position has in this draft. They'd love if local boy P.J. Hairston would fall to them to bolster their lackluster shooting, and they'd love it even more if Michigan State power forward Adreian Payne slid on draft night, but both should be gone by this point.

If no one else slides, that'd leave Jordan Adams as their choice, when the Hornets would gladly live with. He's a crafty player that gets to the line a ton, but he's also a physical player that has natural scoring instincts.

The Hornets will look for size here, needing to add depth to their big man rotation. James Michael McAdoo would be the ideal choice because of his athleticism, high-motor, and rebounding ability, though his offensive game needs some work. If he's off the board, look for them to go after Isaiah Austin, a big, long Baylor big man that has range all the way to the three-point line.

Who should the Hornets pick? Can the franchise make the playoffs two years in a row? Tweet your thoughts to @brauf33.