Carmelo Anthony Should Ditch New York for D.C. this Offseason 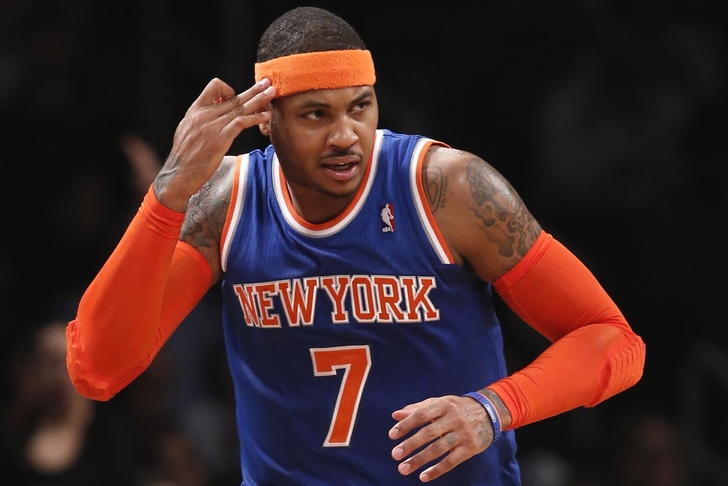 New York Knicks star forward Carmelo Anthony is set to be an unrestricted free agent this offseason, as he has stated publicly that he plans to opt out of the final year of his contract. The Knicks are currently in salary cap hell with the likes of Amarè Stoudemire, Tyson Chandler and Andrea Bargnani set to make $23.4M, $14.6M and $12M next season, respectively. Additionally, the Knicks have smaller deals on their books that they wish they could get rid of such J.R. Smith’s contract (3 years $18M remaining) and Raymond Felton (2 years $8.5M remaining).

For this reason, it would not be wise for Anthony to re-sign with the Knicks. New York is essentially locked into their current roster for at least the next two seasons. With no team likely to take any of these underachieving, significantly overpaid players off the Knicks hands, why would Melo believe he would have any better luck next season with this roster than he’s having now? Melo stated on ESPN’s SportsCenter that a championship is his main goal.

"My concern is to be able to compete on a high level, a championship level, coming in this last stretch of my career.” Melo said. “I want to compete at that level.

Do the Knicks really give him the best opportunity for success as he enters his thirties? Probably not.

When considering possible fits for Melo, the first teams that come to mind are the Lakers and Clippers.

The Lakers are going to have a bunch of cap space with only Kobe Bryant, Steve Nash, Nick Young and Robert Sacre under contract next season. The Clippers, on the other hand, have no cap space, but with the close friendship Chris Paul has with Melo, you never know. The thought of a Paul, Griffin and Melo threesome is very appealing. However, the likelihood of the Clippers being able to pull this off is slim, and I guarantee the Clips doing a sign-and-trade sending Blake Griffin to NY is not happening. The appeal of Los Angeles is obvious for Melo. He already owns a home there and his wife LaLa has a career that is essentially based in LA.

Another destination that Melo should consider is the Suns. While Phoenix is thought to be a long shot, if Anthony is serious about competing he should a least consider signing with Phoenix.

The Suns have a bunch of young players that are playing phenomenal basketball right now. With established borderline all-stars Goran Dragic and Eric Bledsoe, young up-and-comers like the Morris brothers, Miles Plumlee, and Alex Len, as well as key role players like Gerald Green and P.J. Tucker all on the roster, the addition of Melo could easily put them near the top of the West.

While the Lakers, Clippers and Suns are all viable destinations for Anthony, I am going to explain why the best fit for Melo is in the nation’s capital with the Washington Wizards.

Before you run off, laugh and scoff at the thought of Melo wanting to join the notoriously lowly Wizards, give me a chance to explain why D.C. is the best fit for Melo as he enters the last few years of his prime.

The Washington Wizards are currently 28-28, good for fifth in the Eastern Conference, but let’s take a closer look at their roster. Going into this offseason, the Wizards have a bunch of contracts coming off the books and an expected cap space between $16-$18 million. These contracts include Trevor Ariza, Marcin Gortat, Trevor Booker, Kevin Seraphin, Garrett Temple, Chris Singleton, Al Harrington and Glen Rice Jr. The players still under contract next season include John Wall, Bradley Beal, Martell Webster, Nene, Andre Miller and Otto Porter Jr. With only six players under contract, the Wizards have a real opportunity to build around their current core of Wall/Beal/Nene this offseason.

Additionally, Wizards' head coach Randy Wittman’s deal is up this offseason as well.

This is the perfect storm for Carmelo Anthony in a multitude of ways.

First off, Melo wants the opportunity to compete. The Wizards are competitive now, but are missing an ingredient. The Wizards need a scorer and a go-to guy that can help ease the burden for John Wall and Bradley Beal. They need a closer who can help them maintain leads that they so often give up late in games. Two things that not even the biggest Melo critic (including myself) could ever take away are Melo’s ability to score at will and hit big shots to close out games. Anthony could be that missing link that puts the Wiz into real contention in the East.

While Wall and Beal can score in bunches, Wall is better suited in a secondary scoring role, while Beal would benefit from the defense not being able to scheme against him so easily. Melo's presence would help Beal and Wall immensely by relieving pressure off of the dynamic duo. This would also work in Melo’s favor, as he wouldn’t have to play so many minutes and be the end-all be-all for the Wiz, as he is currently with the Knicks.

Upon joining the Wizards, Anthony would be surrounded by young talent. 23-year-old all-star point guard John Wall and 20-year-old budding star shooting guard Bradley Beal may already be the best backcourt in the league. Otto Porter Jr., 2013’s third overall pick, has barely played this year, but it would be foolish to think Porter won’t get things figured out with another offseason and some playing time under his belt.

Aside from joining a roster with one of the best backcourts in the league, Melo would be joining a roster with PF/C Nene, his former teammate from his Denver days. While Nene is overpaid at $13 million a year, he is a skilled big man who can score in the post, something every contending team needs. Martell Webster is another nice player who can spread the floor and knock down three-pointers.

The real sell here though for Melo should be the opportunity to play with a young backcourt tandem like John Wall and Bradley Beal. Those two are pretty darn good now; imagine how good they’re going to be within the next couple of seasons. Melo would fit perfectly at the small forward spot, or the Wiz could go small and play Anthony at the four and Nene at the five.

Additionally, Carmelo Anthony could facilitate bringing in the Head Coach of his liking with Randy Wittman’s contract expiring.

While Carmelo Anthony probably won’t even consider signing with the Wizards this offseason, I argue that it would benefit both Melo and the Wizards to strongly consider making this happen.

As a known critic of Melo’s game over the years, I have been pleasantly surprised by how Melo has raised his level of play over the past two seasons in New York.

The opportunity to stay in the Eastern Conference, where only two teams are real contenders (Miami Heat & Indiana Pacers), should appeal to Melo and his championship pursuit. The West is already overloaded with star talent and contending teams, so there is no reason for Melo to make his championship chances any smaller.

The road to the Finals in the East is a much easier road; therefore, it doesn’t make much sense for Melo to switch coasts unless he just can’t resist the appeal of playing in LA. While the Phoenix Suns are an enticing option, the opportunity to play with a core of Wall and Beal should be of real consideration for the former scoring champion. No, playing for the Washington Wizards isn’t as glamorous as playing in LA or New York would be; however, the opportunity to contend is Melo’s ultimate desire. If he joins the Washington Wizards this offseason, he would have that opportunity.