Can the new-look Rockets make noise in the playoffs? Houston Playoff Preview 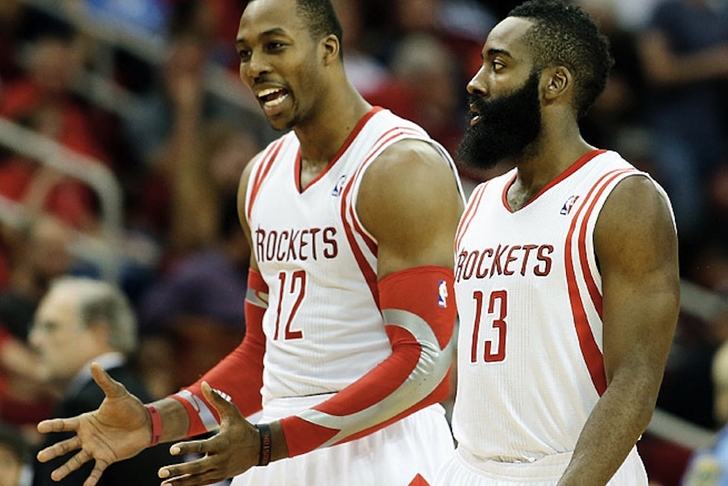 The Houston Rockets made a big splash in the offseason by luring All-Star center Dwight Howard away from the Los Angeles Lakers to join fellow superstar James Harden in the hopes of forming their own championship contender.

The Rockets have one of the most dynamic starting lineups in the league, with Jeremy Lin, 6'10" Chandler Parsons, and an athletic Terrance Jones, making the opposition have to guard all five guys on the floor at all times. Because of that, they're among the best offensive teams in the NBA, averaging 107.7 points per game (2nd in the NBA).

But perhaps this team's weakest link is their defense. They rank in the bottom part of the league and are giving up an average of 103 points per game, something that championship teams simply do not do. If this team wants to reach their goal of winning titles, they're going to have to play much, much better defense.

Howard has become a polarizing figure since he left Orlando a few years ago, but what gets lost in the shuffle of people complaining about his attitude and "softness" is that he's still the best center in the game. And for the Rockets to make a deep run in the playoffs, he's going to have to play like it.

Howard averages 18.5 ppg and 12.3 rebounds per game, numbers that have stayed consistent throughout most of his career, but his defensive effectiveness has dropped. He's averaging under two blocks a game and is still solid along the back line, but he hasn't been anywhere near the level we've come to expect from D12 since his back surgery.

His presence on the offensive end opens up good looks from long range for the rest of Houston's talented roster, but the Rockets need him to play like the old Dwight Howard on the defensive end to help bolster their terrible defense in the postseason.

Luckily for Houston, they'll face Portland in the first round, and if they advance, chances are they'll face San Antonio in the second round. Both the Blazers and Spurs are talented teams; Houston just holds the upper hand due to the contrast in styles of play.

Portland and San Antonio play a slower, more methodical game while the Rockets love to play up-tempo and get up and down the court. The big key is Howard, whose athleticism is way above that of star big men LaMarcus Aldridge (POR) and Tim Duncan (SA), allowing him to dominate the low block at both ends of the floor. That in turn opens up more opportunities for perimeter players, where Harden becomes deadly.

Just because of that huge matchup issue, it's no surprise that Houston has only lost one game to either team this year.

On the flip side of that, Houston's defense gets exposed when other teams can match their style of play and level of athleticism. The Clippers and Thunder are two teams that have size on the perimeter to bother the likes of Harden, Jeremy Lin, and Chandler Parsons and the athletic big guys to handle Howard. The Rockets were a combined 1-7 against these two teams in the regular season, but luckily they won't face either until the Western Conference Finals if they make it that far.

Houston cruises by a hugely overachieving Portland squad, and then surprisingly beats San Antonio in six games in the second round. OKC advances past the Clippers in seven games and Westbrook's knee injury takes him out for the rest of the playoffs, severely limiting the Thunder. The Rockets take advantage and win in five or six games, advancing to the NBA Finals against the Heat, where Howard is just too much down low and wins Finals MVP as Houston becomes NBA Champions.

Portland steals a game at Houston and regains home court in their first round series, which they use as a catalyst to beat the Rockets in seven games.

Houston is tricky because they rely so much on their outside shooting that it usually makes or breaks them. However, they've been hot of late going into the playoffs, and I expect that to continue in their first round series with Portland. The Blazers also have no answer for Harden or Howard, and the Rockets should cruise to an easy first round victory.

The next matchup with San Antonio is a tough one. The Spurs are the Spurs, and they always find a way to attack an opponent's weakest part, which for Houston is their defense. And with the way the game slows down in the postseason, the Rockets might not be able to always outscore their opposition. However, they just matchup so well with San Antonio that the Rockets will win in six games.

There they'll face the Clippers in the Western Conference Finals who will expose Houston's terrible defense, sending the Rockets home short of the Finals.