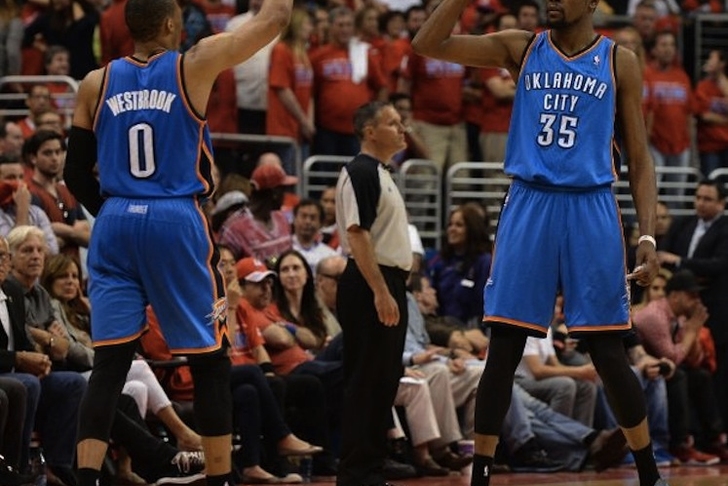 San Antonio and Oklahoma City came into the season as the two favorites in the West, and they did not disappoint.

Many wondered how the Spurs would recover from a disastrous meltdown in Games 6 & 7 of the Finals last year, since that was supposed to be their last stand.

Turns out, they're making another last stand in an unconventional way.

Head coach Gregg Popovich did the most Popovichian thing ever this year: none of his starters averaged more than 30 minutes played a game, had the most different starting lineups in the league (by a WIDE margin), and the Spurs still finished with the best record in the league. Tim Duncan reminds everyone that he never ages, Tony Parker had another stellar below-the-radar year, and Manu Ginobili got back to playing more like the old Manu.

On the flip side, Kevin Durant broke out of LeBron James' shadow to win his first - presumably of many - MVP award despite playing without fellow All-Star Russell Westbrook for most of the season. Oklahoma City still managed to take care of business by grabbing the second-best record in the league, only behind the Spurs.

Both teams were uncomfortably forced to Game 7's in the first round of the postseason. The Spurs then managed to quickly get past Portland in five games while OKC pulled out a crazy series over the Clippers in six.

They're the two best teams in the league (Record-wise, Heat fans. Calm down.) and both are playing their best basketball. This should be fun.

This was kind of a surprise, especially with the average margin of victory being just under 10 points a game. The Thunder just a bad matchup for San Antonio. It's a classic case of young-vs-old and experience-vs-athleticism. Young and athletic - especially when they also have a good deal of experience - will win every time.

Tony Parker and Tim Duncan are models of consistency, but Ginobili is a bit more of a wild card. He comes off the bench but plays starter minutes, and is the third apple in the Spurs' Big 3.

When Manu plays well, San Antonio is almost unbeatable; when he's off, it's tough for them to win. As he's gotten older - he turns 37 in two months - his good play has gotten more inconsistent and less reliable. He's going to need to bring it more often than not for the Spurs to make their second consecutive Finals trip.

San Antonio wins IF: Two of their Big 3 are on every single game and their bench continues to produce at otherworldly rates.

Oklahoma City wins IF: Both Kevin Durant and Russell Westbrook continue their strong play and Steven Adams fills the shoes of Serge Ibaka, who's out for the playoffs with a calf injury.

Remember what happened when these two teams squared off in the conference finals two years ago? San Antonio won the first two games before OKC ripped off four straight to advance to the Finals, and the reason they did so was because they were just so much more athletic than the Spurs.

What's changed since then?

San Antonio's core has gotten older and slower, while Westbrook and Durant are hitting their prime. There's no doubt the Spurs supporting cast is much better than Oklahoma City's, but role players don't win a playoff series - superstars do.

The Spurs didn't have anyone who could match Russ & KD last time, and that hasn't changed.