Can the Pacers Get Over the Hump? Indiana Playoff Preview 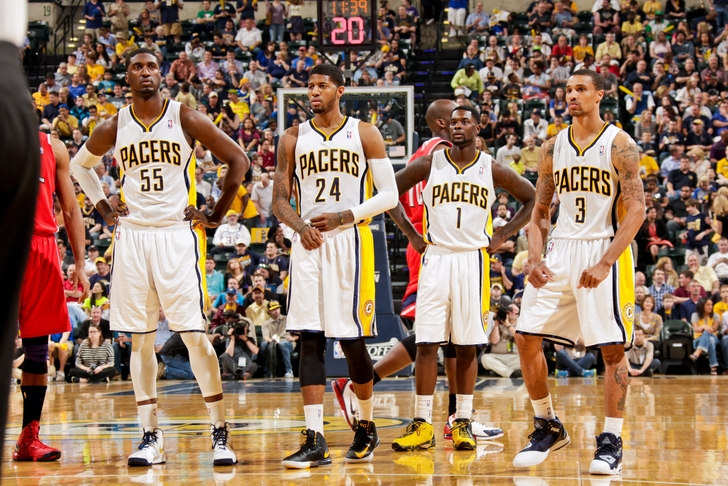 Indiana was set up for success this season.

They lost to the Heat in one of the most exciting seven-game series in recent memory and returned all their key parts. They upgraded their bench (their one big weakness from last year), and Paul George was going to make the leap to being the third best player in the league behind LeBron and KD.

For the first half of the year, everything was falling into place. George WAS the third best player in the league, center Roy Hibbert was a defensive menace, Lance Stephenson became a consistently viable offensive option, and the Pacers had a huge lead atop the Eastern Conference.

Then they picked up potential cancer Andrew Bynum. Then they traded locker-room favorite Danny Granger for Evan "I love killing all offensive rhythm" Turner. For a team that was noted for their amazing team chemistry, these moves were a gamble.

All is not good in Pacerland. Their defense is still among the NBA's best (92.2 points allowed per game) but their offense has dipped to the bottom-five in the league (96.7 points per game. What's more alarming is their newfound lack of ball movement and effective offensive sets. They average under 20 assists per game as a team, which is good for 28th out of the 30 teams in the league.

Everything that was going right for the Pacers a few month ago is now going down the drain. Can they recover in time?

I realize Vogel isn't an actual player (although that might be fun to see), but he is the biggest key to getting Indiana back to where they were.

We can argue 'til we're blue in the face about whether making those roster moves mentioned above were worth it or not (they obviously weren't—if it ain't broke, don't try to fix it!), but Vogel is the guy in charge of making it all work.

If he can motivate his team to get back to playing inspired, dedicated, team basketball, the Pacers can be hoisting the Larry O'Brien Trophy in June. If he can't, this team will be lucky to make it the Eastern Conference Finals to face the Heat. And he'll probably be out of a job.

Similar to the Heat, the rest of the East poses no real threat to an Indiana-Miami showdown in the conference finals. Why Miami is a better matchup than everyone else for the Pacers is that the Pacers LIVE to play the Heat. They bring out the best in every single player on Indiana's roster, which is mostly because this entire Pacer team—from the front office to the players on the court—have built around and been focused on the goal of beating Miami. Because of that, Indiana always gives that little extra attention that causes them to play their best against Miami, and they don't give to anyone else.

Is it out of the question that the Pacers could lose to the Hakws in the first round of the playoffs?

In this bad stretch, Indiana has been blown out of the water by Toronto, Dallas, Chicago, Washington, Cleveland, Charlotte, and, you guessed it, Atlanta.

That might be stretching it a bit, but the Toronto Raptors can cause major problems for Indiana. They're essentially what Indiana was two years ago - a group of young, athletic players who have outstanding chemistry and play extremely hard. They're going to challenge the Pacers every game—heck, every possession—and if Indy isn't playing their best, Toronto will take advantage.

Given the fact that both teams are going in opposite directions and they split the regular season series, this second round matchup might be really, really interesting.

Indiana uses the first round of the playoffs against Atlanta to turn this ship around (and if you can't turn things around against the Hawks, you're hopeless). They gradually build their confidence back up and beat the Raptors in five games, getting back to their old selves and giving them rest before playing the Heat. They pull out the tough six or seven game series over Miami, and then defeat whichever beat-up team comes from the West in five or six games, becoming NBA Champions.

Indiana's struggles continue and they get a tougher-than-desired six game series with the Hawkss. They advance to face a hungry Toronto team looking for a chance to prove themselves. Indy is looking ahead to facing the Heat and doesn't take every game seriously and get upset by the Raptors in six or seven games.

While this team does have MAJOR problems at the moment, it's hard to imagine that they won't turn things around. They just have too much talent and pride to let that happen. I think playing Atlanta and Toronto in the first two rounds will play to their advantage, giving them a round to figure themselves out without a serious threat (Hawks), then another round against a decent team to gain confidence even though they have little chance of beating Indy (Raptors/Nets). And if they get their shot at the Heat, which I think they will, they'll take advantage of it in six or seven games and get to the Finals.

However, Indiana has been so invested in just beating Miami, I think they'll be emotionally and physically drained and won't have enough to defeat whoever comes out of the West.