Can John Wall lead the Wizards back to playoff success? Washington Playoff Preview 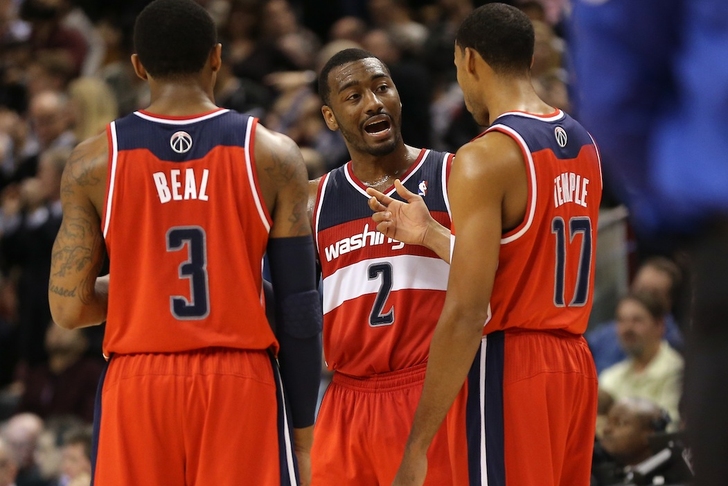 The Washington Wizards came into this season hoping to make the next step and become a playoff team, which they accomplished behind the stellar play of point guard John Wall (19.4 ppg, 8.8 apg, 4.4 rpg). The rest of the team has found and accepted their roles throughout the course of the season, but they still need to upgrade their overall talent level if the franchise wants to continue their upward projection.

They've become a solid defensive team, ranking in the top third of the league allowing only 99.4 points per game. They also play really well as a team and share the ball, ranking eighth in the NBA with just over 23 assists per game. However, Washington's offense has taken a step back, and the don't have much of an interior presence. Nene and Marcin Gortat are nice players, but they're not going to win you any games.

No. 3 overall pick Otto Porter was supposed to give this team a boost in the frontcourt, but he's only played in 36 games this year and averaged under nine minutes a game. Still, the Wizards managed to be one of the league's most improved teams thanks to Wall.

But can he lead them to their first playoff series win since Gilbert Arenas & Co. were one of the Easts' best teams?

Wall has solidified himself as one of the leagues best point guards and is consistently productive on a nightly basis. Beal is one of the NBA's budding young stars and has the ability to light it up on any given night, but he hasn't been as consistent as Washington would like.

For the Wizards to have any sort of chance of causing damage in the playoffs, Beal is going to have to play at a high very level. If he can, him and Wall will do for Washington what Stephen Curry and Klay Thompson did with Golden State last year.

Chicago plays a slower style of basketball, but with Wall's ability to singlehandedly pick the pace of an entire game, the Bulls are usually forced to play faster than they'd like to. They don't have anyone who can handle Wall defensively, and Chicago just can't score enough to keep up with a team that plays as fast as the Wizards.

For Miami, their weakest point is at the point guard position, which Wall can obviously exploit. But the difference in the matchup between these two teams is Washington forward Trevor Ariza who can guard LeBron James as well as anyone in the NBA. Because of that, Washington managed to split the season series between the two sides.

Indiana is just a really good team that's above average at all five positions on the floor, and their talent level is just a lot higher than Washington's. Toronto, on the other hand, has a very similar roster to that of the Wizards, and they also play at a faster pace. However, the Raptors took three of the four games between the two team in the regular season, with the lone loss coming in triple overtime. That's because Toronto has gotten the guard play from Kyle Lowry and DeMar DeRozan to put them on the same level as Wall and Beal, but they're much better in the post than Washington, which they've been able to exploit.

Beal and Wall take their games to another level and knock off the Bulls in six games. But from there they'll face the Pacers, who they might be able to steal a game or two from, but there's no real way Washington will be able to get past Indiana.

Washington is one of the exciting young up-and-coming teams in the NBA, but they're not at the point where they can be a serious contender yet. However, they got lucky with how well they match up with Chicago, and I think will be able to steal the series over the depleted Bulls in six games. But that's as far as they'll go, because they won't be able to beat Indiana.