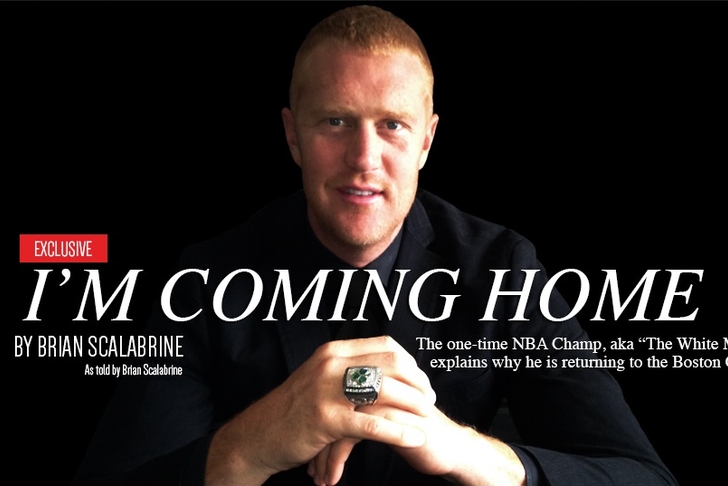 Brian Scalabrine is coming home, too.

A fan favorite throughout his NBA career, Scalabrine (also known as the White Mamba) had spent last year working as an assistant coach with the Golden State Warriors. He'll now return to Boston as an announcer for Comcast SportsNet New England, and he announced the move in an absolutely brilliant parody of LeBron's Sports Illustrated feature revealing his return to Cleveland. Some highlights:

Before anyone cared where I would play basketball, I was a kid raised in Enumclaw, Washington. It’s where I walked.  It’s where I ran.  It’s where I did a paper route at age six.  It’s always held a special place in my heart until 2005. From the moment I signed with the Celtics, I knew this was my new home.

...Remember when I spurned the Celtics and signed with the Chicago Bulls in 2010? Actually I begged Ainge to keep me and he wished me the best of luck.

...I will always think of Chicago as my third home and Oakland probably as my fourth home…but not like the hood in downtown Oakland, more like the suburbs. Without the experiences I've had in these places, I wouldn’t be able to do what I’m doing today.

...I went to Chicago because of Tibs and D-Rose and the crazy energy of Joakim Noah, and it was my only job offer in the states...

I may have a press conference, and I am definitely having a party. And all of Boston will be invited. And when we are done, we will still have a few months before we have to get to work.

...Even Bill Simmons has wanted me back for quite some time. I've met with Bill, face-to-face, man-to-man. We’ve hashed it out. Bill fist pumped on the air during this year's NBA Draft. Everybody makes mistakes. I’ve made mistakes as well – I once mispronounced Omer Asik’s name in Chicago. Who am I to hold a grudge?

I know that I have a lot to learn but I see myself as a Champion, and I think I can help break down some great Marcus Smart dunks this season. I think I can elevate Kelly Olynyk and Chris Babb’s game by the amount of research I make my interns do before announcing road games.

In Boston, nothing is given. Remember in the movie The Departed when Francis Costello said, “No one gives it to you. You have to take it.” That was a great scene and a great Boston movie.

Thank you, Brian Scalabrine. That was a work of art.