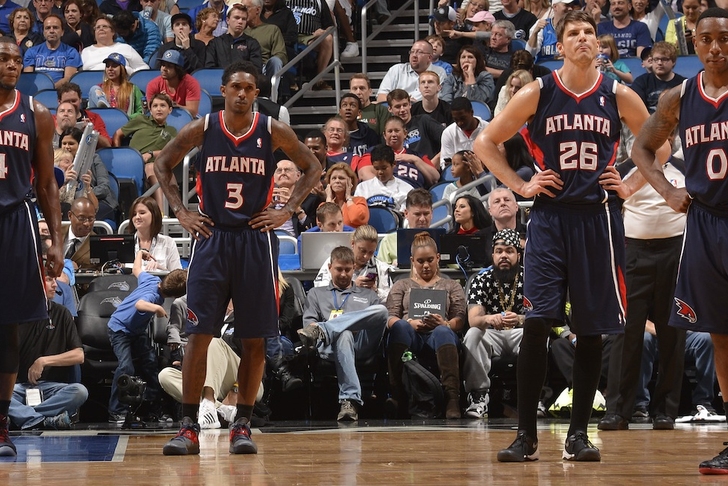 Atlanta had a ton of cap space and roster flexibility in the offseason, and used that to lure Paul Millsap to join Al Horford on their front line. They had hoped to land another free agent, but were unable to do so. GM Danny Ferry managed to sign a couple role players to one year deals so the Hawks still have cap space this summer, and the Hawks' performance last season might make them a more desirable destination.

The team got off to a hot start of the season and were in the top half of the Eastern Conference, then Horford tore a pectoral muscle and was out for the rest of the season. Atlanta and first year head coach Mike Budenholzer essentially tried to tank from that point on but still managed to grab the 8th spot because of how bad the rest of the East was.

Then they pushed Indiana to the brink in the first round thanks to point guard Jeff Teague taking his game to another level. Unfortunately, the Hawks just didn't have enough firepower to get past the Pacers.

Atlanta will get a boost from Horford's return and potentially from free agency, but they also have a good chance to get an impact player from the draft.

The Hawks are set at point with Teague and down low with Horford and Millsap, but they could use more help on the wing. Rodney Hood is the safe option here with his sound all-around offensive game and ability to play both guard and forward, but I think they'll take a chance and go after UCLA's Zach LaVine, who is rising fast up draft boards.

He has as much upside as anyone in the draft, and could be one of the steals in this class. Atlanta needs more quickness and firepower on the wing, both of which LaVine can provide in bunches. His ability to play point guard as well makes him even more valuable.

So while Millsap and Horford are guaranteed starters down low, but they're short - 6'8" and 6'9", respectively. They'll use this second round pick to go after someone with size they can bring off the bench when one of those two need a break. Alex Kirk from New Mexico would provide the Hawks with an energy guy off the bench. Isaiah Austin would be another good choice who at seven-feet tall can make shots from the perimeter.

Or if the Hawks decide that height is the only factor in this pick, 7'5" - yes, 7'5"!!!! - Sim Bhullar from New Mexico State would be a physical presence down low, but he is extremely lacking in mobility at 360 lbs.

Who should the Hawks pick? Can they take they next step and become a contender? Tweet your thoughts to @brauf33.