The 7 Biggest Storylines To Watch For This NBA Offseason 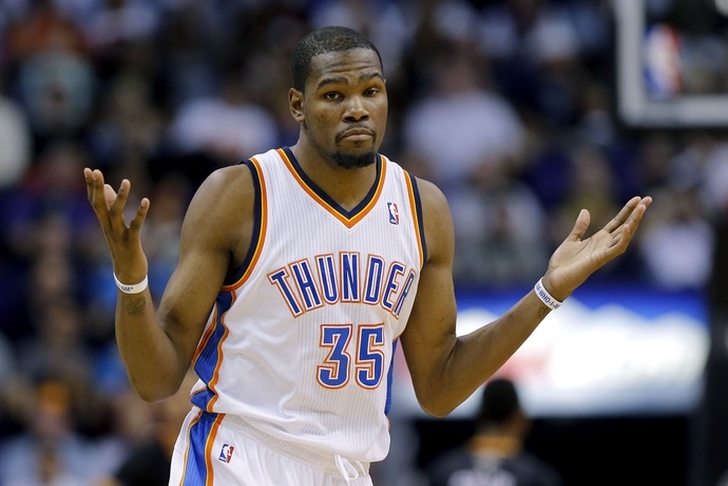 The NBA Offseason is here, and it's shaping up to be a chaotic one. While much of the attention early will be paid to Kevin Durant, there are several other players set to hit the open market that will command major money. While the Durant storyline is the obvious one, it's far from the only notable one. With that in mind, here are the seven biggest storylines to watch for during the 2016 NBA offseason.

7. Who Gets Paid?
The salary cap is rising, and that means several teams have cap space burning a hole in their pockets. That's going to mean players are getting a lot more than they would have received just a few seasons ago. Teams like the 76ers, Magic, Hornets, Nets, Mavericks, Celtics and so many more have enough space to offer at least one max deal. The obvious names like Dwayne Wade, Hassan Whiteside, Al Horford, Mike Conley, DeMar DeRozan and the rest of the clear max contract players aren't the only ones who are going to get a lot of money this offseason. Free agents like Marvin Williams, Bismack Biyombo, Ryan Anderson, Nic Batum and Kent Bazemore and more are going to get paid surprising amounts this offseason.

6. Who Do The Heat Keep?
The Heat have the following players set to hit unrestricted free agency: Dwyane Wade, Luol Deng, Udonis Haslem, Gerald Green, Amar'e Stoudemire, Joe Johnson, Hassan Whiteside and Joe Johnson. Tyler Johnson is also a restricted free agency. There's no way the Heat can afford to bring back everyone, especially if they make a run at someone like Kevin Durant or Al Horford. The biggest question for the Heat is what to do with Whiteside. He's the best center on the market, although he's not without flaws and the Heat seem nervous about giving him a max deal. If they don't he could leave.

5. What Do The Lakers Do With Their Cap Space?
The Lakers have the most cap space of any team at the moment, with $82 million. While that's in large part because many players are free agents, like RFA Jordan Clarkson, the Lakers have the money to go make a splash or two. While Durant or James would be great, that's a stretch. Brandon Ingram will be the No. 2 overall pick, which means that Lakers will likely search for a center. Hassan Whiteside and Al Horford are the most likely targets, but the Lakers could try to add another big name or two this offseason.

4. Can The Spurs Make A Splash?
The Spurs core of LaMarcus Aldridge and Kawhi Leonard is set. But the Spurs are going to make a pitch to Durant, although that seems unlikely. But going after a Horford or Mike Conley makes sense for this team. Whether or not the Spurs can land Conley (who the Knicks also badly want) is up for debate. If the Spurs can't land a bigger fish, adding a few role players (like one to replace Manu Ginobili as the sixth man for the future) might be their choice.

3. What Changes Do The Warriors Make?
The Warriors are going to make changes and their owner already said they'll be aggressive. That means Durant, but it's no sure thing the Warriors will land the superstar (more on him below). Harrison Barnes and Festus Ezeli are restricted free agents and prime candidates to slot into the No. 7 storyline. The Warriors could target another big, like Dirk Nowitzki, Joakim Noah, or even Dwight Howard. The team will also look to upgrade their bench if possible.

2. Do The Cavs Make Any Moves?
Kevin Love has been rumored as a trade candidate, but head coach Tyronn Lue said he's not going anywhere. Still, the Cavs might be interested in dealing Love for a better wing defender or two. That's easier said than done. The Cavs would be justified in not changing a thing on their roster after winning the title, but they might lose players like Timofey Mozgov and Matthew Dellavedova. That's not the worst thing, but barring a LeBron James departure (highly unlikely), the Cavs will likely only make a few minor changes to the roster.

1. Where Does Kevin Durant Go?
This is the big storyline. It's the summer of Durant, and every team in the Association would love to land him. The vast majority of moves won't be made until after Durant makes his decision and it will have a ripple effect on the entire NBA. Once Durant signs/makes his decision, expect the rest of the moves to come in a flurry. The Thunder are still the favorite for Durant (who will sign a one year deal with a player option for a second so he can make even more money next year), but don't count out the Warriors as well as several others (Spurs, Lakers, Celtics, Heat, Wizards, etc) that will make pitches.