5 Teams That Could Trade For LaMarcus Aldridge 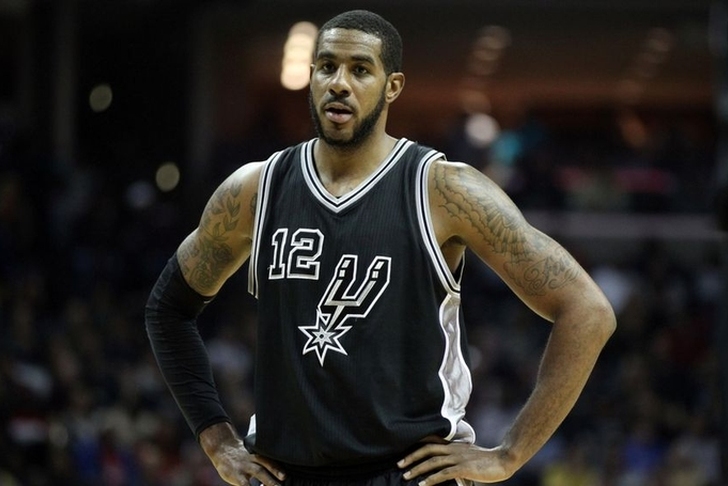 When the San Antonio Spurs signed LaMarcus Aldridge as a free agent before this past season, they did so with the intention of making him part of their new core, along with Kawhi Leonard. However, that appears to be short-lived scenario. ESPN's Jackie MacMullan told CSN New England that the Spurs are preparing to shop Aldridge and would like to get rid of him before the trade deadline:

"Sources were telling me the other day that LaMarcus Aldridge may not even finish the year with the Spurs," MacMullan said. "That experiment hasn't quite worked out the way they hoped."

Here's the full video of her discussing Aldridge:

So, as the Spurs look to deal Aldridge, who would want him? Here are the five teams that are the most likely to trade for Aldridge:

5) Philadelphia 76ers
The Sixers are the true wild card of this bunch. Obviously, Aldridge would be a huge upgrade in talent for them, and they are very active on the trade market as they try to deal Nerlens Noel. Noel is the kind of young defender that appeals to San Antonio, but Philadelphia's reasoning for dealing Noel is that they already have too many big men on the roster. Is Aldridge good enough for them to not care about that?

4) Boston Celtics
Boston's name has to mentioned every time an All-Star caliber player becomes available considering the mass amounts of assets they have and their desire to add a big-name player. Aldridge certainly fits the bill, but with concerns him both in Portland and in San Antonio, Boston probably doesn't want to give up those assets at the risk of disrupting their locker room chemistry. Plus, him and the newly-acquired Al Horford are very similar players.

3) Atlanta Hawks
The Hawks are in a conundrum at the power forward position themselves. There are rumors they may be interested in dealing All-Star Paul Millsap before the trade deadline so they don't risk losing him for nothing in free agency in 2017. Aldridge is under contract through the 2017-18 season, meaning he could give the Hawks enough stability that they'd be interested in making a deal. Plus, his shooting ability makes him a perfect pair with Dwight Howard.

That works well for Atlanta, but this deal would also work well for San Antonio. Millsap has the kind of versatility that the Spurs love, and he's almost definitely re-sign with them. Could we see an All-Star for All-Star swap early in the season?

2) Los Angeles Lakers
Trading for Aldridge might be a bad idea for the Lakers given the potential of their current young core, but their front office has made it known that they want to improve their roster immediately to make them more attractive to free agents. They tried hard to get Aldridge in free agency in 2015, but he turned them down - now is their second chance. Would they be willing to give up a draft pick and a quality young player or two (Jordan Clarkson, Julius Randle, Larry Nance) to get him?

1) Phoenix Suns
The Suns went all-in on their free agency pitch to Aldridge last year, even signing Tyson Chandler for the sole purpose of using him to make their roster more appealing to Aldridge. Despite being a young team, their ownership wants to win now - make an Aldridge acquisition a realistic possibility.

They have proven young assets they could give up (Brandon Knight, Archie Goodwin, Alex Len), as well as an extra 2018 first-round pick from the Heat. Heck, they could even give up either Marquese Chriss or Dragan Bender (their 2016 first-round picks) if they wanted to deal them.

Armed with the assets, the Suns are going to be the team most aggressive in trying to get a deal done.