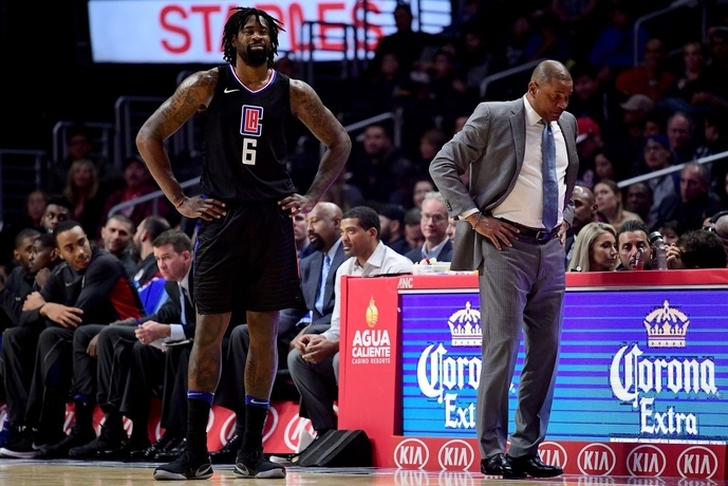 With the Los Angeles Clippers struggling so far this season (8-15) and Blake Griffin out for the next couple of months, All-Star center DeAndre Jordan's name has been mentioned in numerous trade rumors. The Clippers are entertaining the idea of parting with him as the start of a rebuild in LA that was really set in motion by the Chris Paul trade, and a number of teams are lining up in hopes of adding one of the league's premier rebounds and shot blockers.

However, not everyone has the assets to pull off a deal. Here are the five teams most likely to trade for Jordan:

5) Washington Wizards
The Wizards have already expressed interest in this deal and, on the court, could present the best fit. Marcin Gortat will be 34 in February and John Wall and Bradley Beal need a long-term big man partner. However, Washington doesn't have many valuable assets they could send the Clippers for Jordan - unless LA is really high on Ian Mahinmi for some reason.

4) Toronto Raptors
Toronto is in a similar situation as Washington but has some young bench pieces (Norman Powell, OG Anunoby) that could make this work. The Clippers would probably have to take back Jonas Valanciunas as well since he and Jordan couldn't play together, which complicates matters.

3) Cleveland Cavaliers
The Cavs have the best asset of anyone on the list with the Nets' first-round pick this year, and while it doesn't look like that pick will be as valuable as we thought at the start of the season, it will still be a top-five or top-10 selection that would be extremely valuable for LA. Of course, they'd have to find a way to offseason Jordan's salary since they're in the luxury tax. If Cleveland is willing to trade Tristan Thompson - or if the Clippers are willing to accept a package of role players like Iman Shumpert and J.R. Smith - a deal could get done.

2) Minnesota Timberwolves
Can you imagine Karl-Anthony Towns playing next to DeAndre Jordan? That would create quite the formidable frontcourt in the West only rivaled by Anthony Davis and DeMarcus Cousins in New Orleans. Unless the Clippers are willing to take Jeff Teague and his three-year, $57 million deal in return for Jordan, Minnesota would have to package promising young players (Gorgui Dieng, Shabazz Muhammad, Justin Patton) with a draft pick or two to appease Los Angeles.

1) Milwaukee Bucks
Milwaukee is the team most actively pursuing a DeAndre Jordan trade, according to multiple reports, and are going all in on the immediate future after acquiring Eric Bledsoe earlier this season. The Bucks do have some valuable assets in Rookie of the Year Malcolm Brogdon, Thon Maker, Khris Middleton, and Jabari Parker, and Los Angeles would likely want at least one of those players (along with a first-round pick) in return, but if the Bucks think Jordan is worth it, a deal will get done.