5 Major Trades That Could Happen Today At The NBA Draft 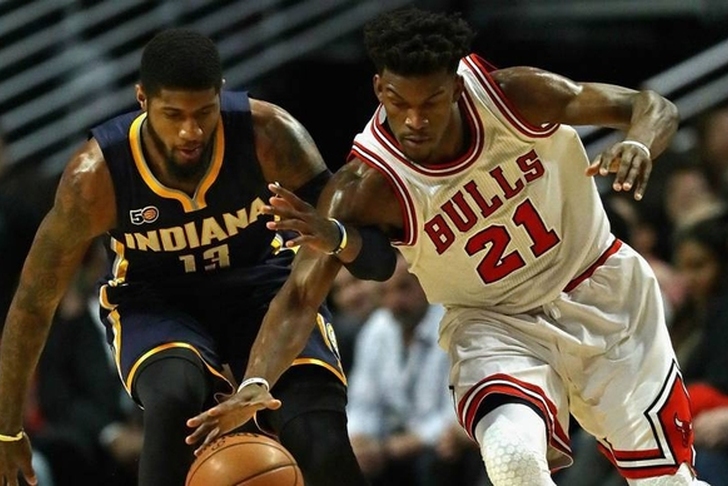 The 2017 NBA Draft is tonight and there's serious potential for blockbuster trades. The rumor mill has been buzzing for several days, with Paul George, Jimmy Butler, Kristaps Porzingis, LaMarcus Aldridge and more linked in trade rumors. Several other players and numerous teams are also in position to make moves. That provides the potential for true chaos during the draft.

While not every trade below will happen, there's a good chance at least one or two will. With that in mind, here are five major trades that could happen during the NBA Draft.

Pacers Finally Move Paul George
George's time with the Pacers is up. He plans on leaving after this season, so the Pacers are trying to shop him and get something back in exchange. The Cavs and Lakers might be the top two threats, but teams like the Trail Blazers, Wizards and Clippers are also in the mix. No team will give up much for George, unless the Cavs can rope in a third team to get the Pacers more young assets. George is just a rental, so there's a real chance the best offer they get is the Lakers offering their two late firsts this year and either Julius Randle or Jordan Clarkson. There's a very good chance George is dealt tonight.

Bulls Blow It Up, Trade Jimmy Butler
The Cavs chased Butler as well, but their lack of young assets and picks makes things tough. The Celtics remain an option, especially if they're willing to move the No. 3 overall pick, a young player (or two) and future picks. The Celtics have a glut of assets, making them a trade option for pretty much everyone on the trade block.

The Minnesota Timberwolves are also making a play for Butler, offering up a package centered on the No. 7 overall pick. The Bulls reportedly covet Josh Jackson, meaning the No. 7 pick and a young player (Kris Dunn, Zach LaVine?) might not be enough. The Bulls seem more willing than ever to deal Butler, but they might stick with him for one more year.

The Knicks Actually Trade Kristaps
Phil Jackson is actually open to moving his budding young star. It's a surprise, since Porzingis is the type of player you move picks for, not the other way around. The Knicks have had talks with the Suns and Thunder, to name two teams, though the Thunder don't have enough to offer. The Suns trading for Porzingis might be the most likely trade for the Knicks. Devin Booker appears to be off-limits, as he should be. If the Suns can get the Knicks to take the No. 4 pick and some combination of players centered on Dragan Bender or Marquese Chriss, it'd be a steal. If the Knicks actually trade Porzingis and don't get a King's Ransom back, well, it doesn't bode well for their future of Jackson's. So far teams talking with the Knicks, including the Celtics, haven't met the Knicks' demands.

Spurs Find A Taker For LaMarcus Aldridge
The Spurs are trying to move power forward LaMarcus Aldridge for a top 10 pick in this year's draft. However, it's tough to see a team giving up a pick for Aldridge. He can opt-out of his deal after this year and struggled far too often in the playoffs. The Suns have been linked to Aldridge and since he nearly signed with them when he joined the Spurs, they'd likely get more than one year with Aldridge. However, it doesn't make much sense for the Suns to give up No. 4 for Aldridge, especially when they could actually land Porzingis. The Spurs have spoken with three teams about an Aldridge trade and the Trail Blazers also have interest.

The Blazers Do Something
I feel pretty confident the Trail Blazers will make some kind of trade during the draft. They have three first round picks, giving them options make several moves. They could bring back Aldridge, though that would require the Spurs taking on contracts, which San Antonio likely doesn't want. The Blazers could attempt to package those firsts and move up into the lottery. Or, and perhaps most likely, the Blazers attach a bad contract (Meyers Leonard, Allen Crabbe) to a first or two and trade them away in the salary dump. In that case, the Nets seem like an obvious trade partner.