5 Biggest Storylines To Watch In The NBA Finals 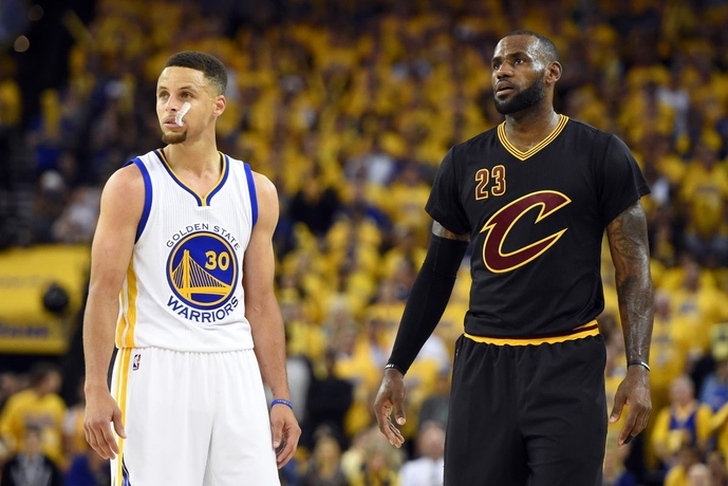 The Golden State Warriors and Cleveland Cavaliers are meeting in the NBA Finals for the third straight season, marking the first time in NBA history in which the same two teams have played for the title three consecutive years. This has developed into the biggest rivalry in the sport (and perhaps all of sports) with both sides looking to take the rubber match. As such, there is plenty of intrigue surrounding this series. Here are the five biggest storylines going into the series.

1) Who cements their legacy?
This is the biggest thing at stake in the Finals. If the Cavs win, LeBron James will have led Cleveland to back-to-back titles and bring his personal count to four, while Golden State will have fallen short of a championship after two record-setting regular seasons. The Warriors would become a one-year wonder who "choked" after that, and that choker label would be placed on both Stephen Curry and Kevin Durant.

On the flip side, the Warriors will cement themselves as one of the best teams in NBA history with a win and set the stage for an expected dynasty run with Durant. It would also mean that many around the league would question if the Cavs will ever win another title with LeBron. Considering both scenarios, there's a lot at stake for both sides.

2) Can the Warriors redeem themselves?
All that said, more is on the line for Golden State. LeBron and the Cavs cemented their legacy with their Finals win last year, something that will only be strengthened with a win. Meanwhile, the outcome of this series will change the perception of the Warriors from one extreme to the other.

Last year, Golden State won a NBA-record 73 games and had a 3-1 lead over the Cavs (you may have heard some jokes about that a time or two) before blowing it. The team, namely Stephen Curry, have been heavily criticized for that collapse. Now, with the addition of Kevin Durant this offseason, they haven't just placed a "championship-or-bust" label on themselves - they've placed a "dynasty-or-bust" mark on them.

Winning will make up for last season's defeat. Another loss to the Cavs? It would do irrefutable damage to this group of Warriors.

3) Kevin Durant vs. LeBron James
Speaking of Durant, he and LeBron James have been the two best players in the NBA for the past decade (though Stephen Curry may have taken that mantle over the past few years). They are the only two that can match each other on both the offensive and defensive end of the court. They are expected to go toe-to-toe all series. Whoever wins this individual matchup should lead their team to victory.

4) Which role players step up?
As great and as important as the stars are in a series like this, role players may very well determine the outcome. Heck, Andre Iguodala won the Finals MVP two years ago for his defense on LeBron. Tristan Thompson is an offensive rebounding force who can change a game, especially against a team without a dominant big man like the Warriors.

Will J.R. Smith get hot from three one game? What about Shaun Livingston defending Kyrie Irving? All of these things are little sub-notes in the gameplan that could change a game, and in a series that is expected to go six or seven games, that game could be the difference.

5) Draymond Green's antics
Remember when Draymond Green hit LeBron in the man region and was suspended for Game 5 of the Finals last year?

Many think that was the turning point in the series. Without Green, the Warriors lost Game 5 at home, setting the stage for Cleveland's comeback from the 3-1 deficit. The Warriors think they would have won Game 5 - and the series - if Green was available. Will Green get into similar antics this series?

Follow our NBA page for all the latest NBA Finals news!