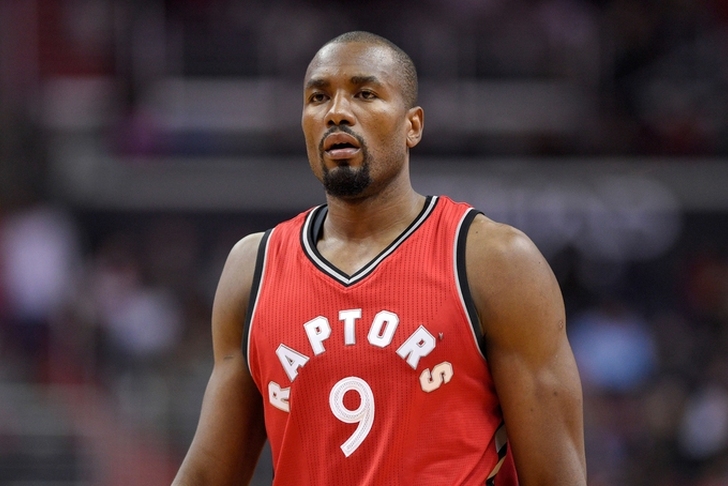 It was a tumultuous 2016-17 season for Serge Ibaka. He was traded from Oklahoma City to the Magic before the season started, then went from Orlando to the Raptors at the trade deadline. Ibaka is now an unrestricted free agent, and while Toronto is going to do everything they can to re-sign him, he is expected to listen to other teams as well. Here are the four teams that are the most likely to sign him.

4) Oklahoma City Thunder
A return to OKC certainly doesn't seem likely, but there's an off chance it could happen. The Thunder plan to go after Blake Griffin in free agency, and if they strike out on him, they'll have plenty of cap space and want to upgrade their roster around Russell Westbrook. Oklahoma City knows what Ibaka can do on the court and they probably won't give him the contract he wants. But, in a free agency class that's not very deep, he may be their best option.

3) Miami Heat
Miami has plenty of cap space, especially after parting ways with Chris Bosh, and are expected to be big spenders as they try to become a playoff team again next season. Bosh's departure also leaves them with a hole at power forward, one that Ibaka would adequately fill. His three-point shooting ability would make him a good pair with Hassan Whiteside, and the two would form perhaps the best shot-blocking duo in the league.

2) Boston Celtics
By now, you probably know that Boston is trying to add a superstar and have the cap space to give someone a max contract this offseason. Gordon Hayward is their top target, but there's a good chance he re-signs with Utah. If that's the case, Ibaka would be one of the best remaining options.

Boston wants to improve their frontcourt and rim protection - Ibaka would do both while giving Isaiah Thomas another complementary offensive option. Plus, they're a legitimate contender and should continue to be thanks to their high draft picks.

1) Toronto Raptors
But, when all is said and done, Ibaka is expected to return to Toronto. General manager Masai Ujiri said that one of the reasons they traded for Ibaka instead of waiting for free agency was that he and the team "need a training camp (together).” Ibaka has also talked about how much he loved his teammates and Toronto's style of play. They will have to blow negotiations not to land him.