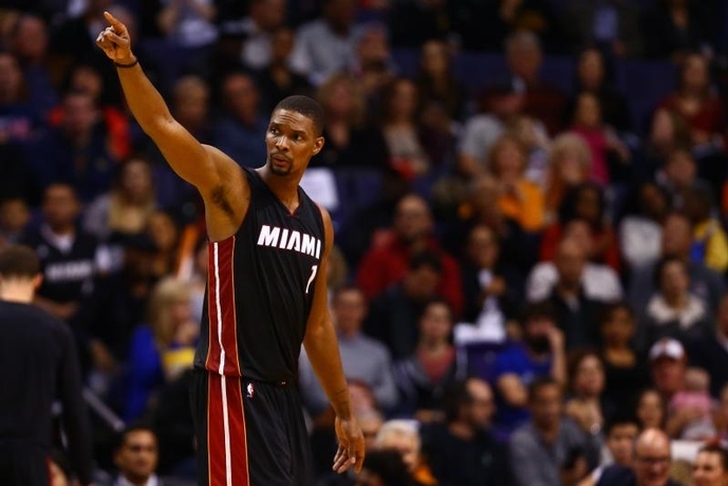 The Miami Heat and power forward Chris Bosh have reached an agreement to part ways, ending a seven-year run with the team. However, Bosh has been plagued by blood clotting issues over the past three years that have kept him off the court since February 2016. Miami didn't medically clear him to play and will get cap relief over the next two years (Bosh is still owned $52 million that will be payed out by insurance), but Bosh believes he can play again.

The agreement will allow Bosh to become an unrestricted free agent, and he has held firm in his belief and desire to play again - though his health issues would likely limit him to only signing a deal for the veteran minimum (and he'd have to pass medical testing).

Who many be interested in him? Here are the four teams that are the most likely to gamble on Bosh.

4) Toronto Raptors
Bosh started his career in Toronto, so why not try to close it out there a la Kevin Garnett in Minnesota? The Raptors are trying to find ways to improve and compete with the Cavs, and if Bosh can get on the court, he would give the Raptors a tremendous asset off the bench that would make them a legitimate contender.

They have been looking for a stretch four in their lineup and traded for Serge Ibaka at the deadline, but they may not be able to re-sign him. Bosh would give them something resembling a backup plan in that regard (although it's a terrible one). Ideally, they would bring Ibaka back and sign Bosh to form a three-man rotation with Jonas Valanciunas.

3) Cleveland Cavaliers
The other Eastern Conference contender on this list, Cleveland makes a lot of sense for Bosh. It would give him the chance to compete for more championships while teaming up with LeBron James (and James Jones) again. However, when the Big 3 was forming in Miami, Bosh balked at the idea of joining the Cavaliers because he didn't want to live in Cleveland. Has that changed now that his options may be limited?

2) San Antonio Spurs
No other franchise looks out for their players and takes care of them - while at the same time getting the most out of them - more than San Antonio. In terms of monitoring his blood clotting, there is no better place for him to go. Bosh can compete for a championship at the same time and not put as much strain on his body in Gregg Popovich's system. That may be what he needs if he's going to continue his career.

1) Golden State Warriors
Does Bosh want to compete for championships? Well, here ya go. The Warriors would provide with the best combination of lifestyle/location, championship contention and care for his body. Golden State is another franchise that has placed a huge focus on taking care of and being more cautious with players and their injuries, and Bosh would have a bench role, putting less stress on his body.

There's also this - the Warriors need him more than any other team. Assuming they re-sign Stephen Curry and Kevin Durant this offseason (which they obviously will), they will have virtually no cap space to sign - or re-sign - bench players. They will be relying on players taking the veteran minimum, and making them more likely to gamble on a player of Bosh's caliber.