3 Things to Watch in Game 5 of the NBA Finals 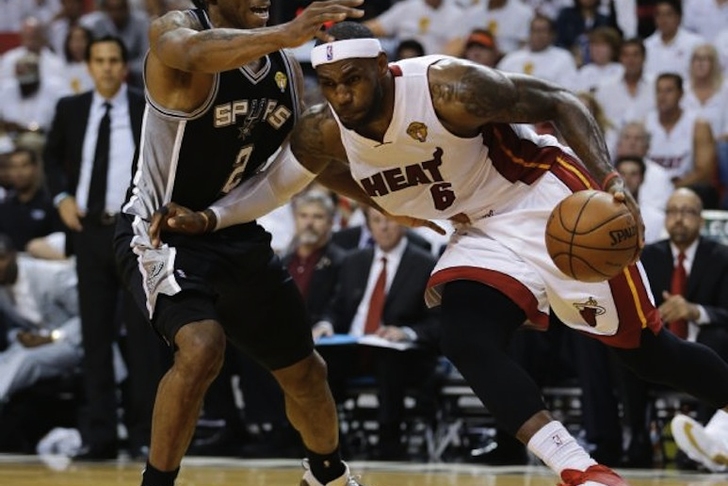 The Spurs are back in San Antonio only one win away from clinching the franchise's 5th championship - all in the Tim Duncan era - and getting revenge on Miami after the Heat pulled off perhaps the most dramatic comeback in NBA Finals history.

LeBron James & Co. are going to have to top that this year, as they're looking to become the first team ever to come back from a 3-1 series deficit to win the Finals.

That seems a little far-fetched considering the beatdowns San Antonio gave the Heat in both Game 3 and Game 4, but anything is possible.

What should we look for to decide Game 5, and possibly the series?

Everyone, including Miami, knew the Heat needed to win Game 4 at home to have a realistic shot at pulling off their three-peat, yet the Spurs managed to pull out another 20+ point win in American Airlines Arena.

Why? Miami didn't bring it.

They were lazy on offense and settled for jumpers, their defensive rotations were slow, and they didn't have the normal intensity we've become accustomed to seeing from the Heat - especially in the Finals.

Miami needs to come out ready to play and dictate the tempo of the game right from the start since they can't afford any slips up. They can't rely on being able to coast and flip a switch when they need to - the Spurs are too good and the Heat aren't as talented as they've been in the past.

If they give another Game 4 effort, they'll be focused on a Carmelo Anthony sales pitch rather than gearing up for Game 6.

All four games in the Finals so far have followed this formula: Spurs jump out on top in the first quarter, maintain the lead in the second, Miami responds with a run in the third, and both teams play even in the fourth.

The difference in these past two games has been San Antonio's ability to increase their lead a little in the second quarter, getting it to a point where the Heat simply can't catch up. They've had the lead after the first quarter in every single game this series, but Miami might change that in Game 5 if they come out and play with the intensity we all expect them to.

All that will be for nought if they continue to ease up in the second quarter and the Spurs pour it on again.

They hold the major bench advantage over the Heat, which has a big part to do with this trend. Because of how much basketball the Big 3 have played since they came together, they're going to need some breaks due to the fact they're worn down. That forces Miami's weak bench to play more, and Gregg Popovich has managed his starter's minutes so well over the season that he can mix and match hot bench players with starters in that second quarter and grab a huge lead.

If the Heat can make it a close game at halftime, they'll win.

It's no secret that the Heat struggle to rebound - they rely on playing small-ball, and finished dead last in the NBA during the regular season in rebounding. They expected to be at a rebounding disadvantage against the bigger Spurs, but they need to work harder to minimize it.

San Antonio grabbed 12 offensive rebounds in Game 4 - a number that's really high, especially when an offense is running as well as the Spurs' has been - and used that to gain a plethora of second chance points.

Miami just can not afford to let that happen when San Antonio is already shooting over 50+% from the field. The more opportunities you give the Spurs, the more they'll make you pay. Look for the Heat to put a big emphasis on defensive rebounding and ending possessions in Game 5.