3 Teams Most Likely To Land Marc Gasol In Free Agency 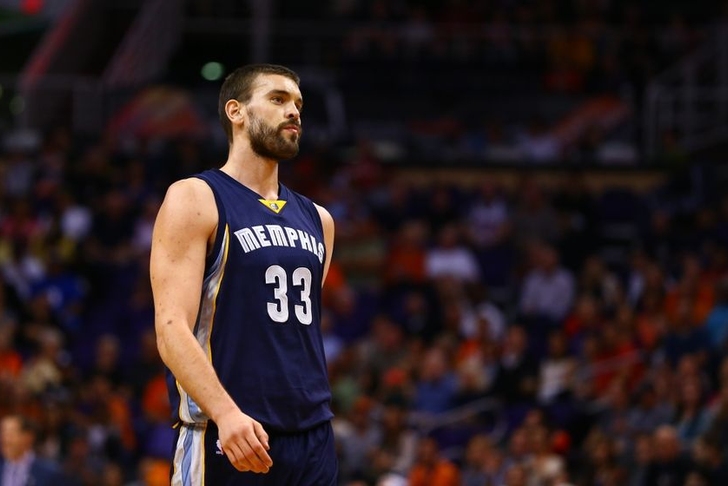 Memphis Grizzlies center Marc Gasol will be one of the most sought-after free agents this offseason with several teams pursuing his services. Which teams have the best chance to land him?

Gasol is target No. 1 for Knicks president Phil Jackson, and he should be. He’s the perfect big man for the Triangle system due to his deft passing touch, and he’ll give the Knicks the defensive presence they thought they were getting from Tyson Chandler. Gasol is also a threat offensively even though he doesn’t need any plays to be called for him, and that will allow Carmelo Anthony to continue to be the focal point of the offense.

New York has been targeting Gasol since the season started, but he's hasn't decided if he wants to deal with the Knicks' rebuilding process. They do have a shot to land the coveted big man, but not a great one.

The Spurs plan to pitch Gasol and fellow free agent big man LaMarcus Aldridge on the idea of being San Antonio's next great big man, and their winning tradition appeals to Gasol. He’s the perfect fit for head coach Gregg Popovich’s system due to his deft passing touch, and he’ll give the Spurs a true defensive presence in the post. Gasol is also a threat offensively even though he doesn’t need any plays to be called for him, another plus for the Spurs’ team-first playing style.

San Antonio is the type of no nonsense, no drama market and team Gasol loves about Memphis. If he does end up leaving Memphis, this is where he'll end up.

However, when all is said and done, it'll be very surprising if he's playing for a team other than the Grizzlies next season.  As Gasol said in his exit interview, he has lived in Memphis since 2001, when his brother, Pau, played for the Grizzlies, and those ties hold strong.

"My whole family has been here since 2001. The place I used to go watch basketball games is now a Bass Pro Shop," Gasol said of the Pyramid, where the Grizzlies first played in Memphis.

Not only that, but the Grizzlies have a very strong team bond, and it's hard to imagine one of their core guys - let alone their best player - deciding to walk away from a very loyal group.