3 Takeaways from Spurs vs. Heat Game 5 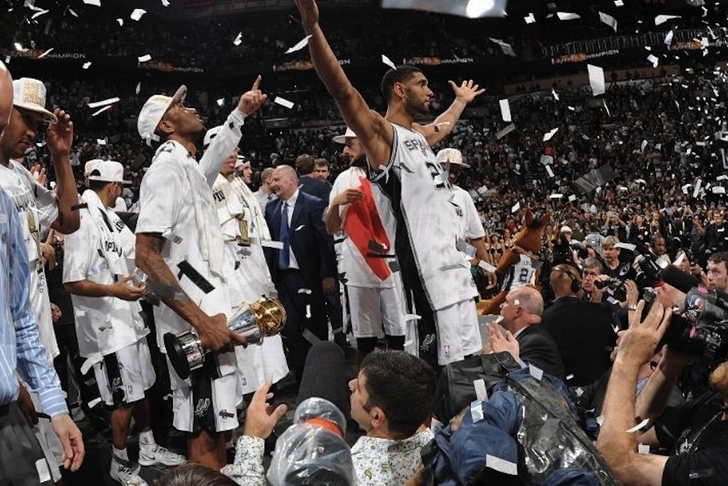 San Antonio came into Game 5 a single win away from securing the franchise's 5th championship, and they managed to clinch the title on their home court beating Miami 104-87.

The Heat had their backs to the wall and came out strong, taking an early 22-6 lead. The Spurs withstood that run and came back with a huge second quarter run of their own to take the 47-40 halftime lead - and they never gave it back.

Now that another season has concluded, what did we learn from Game 5 and the series as a whole?

1) Miami put everything they have into their starting lineup

Inserting Ray Allen into the starting lineup was a smart move by head coach Erik Spoelstra in terms of getting his five best players on the court together, but it REALLY limited his bench.

On the positive side, it created a bunch of mismatches on the perimeter by not having a point guard, which Miami exploited for easy baskets in the first quarter. But once Spoelstra was forced to go to his bench, things fell apart.

Allen had been the one guy the Heat could depend to give them a spark when their starters needed a break, and they weren't able to find that guy in Game 5. San Antonio outscored their bench 22-2 in the first half and 47-21 for the game - a huge disadvantage Miami wasn't able to overcome.

It was a desperation move by Spoelstra, but he didn't have a whole lot of options considering how bad everyone else on the Heat's roster had been playing.

2) It's LeBron James vs. everyone else

It became painstakingly obvious this series that the Miami Heat aren't the team they once were.

LeBron is still at the top of his game, but Dwyane Wade is no where near the player he was two years ago, Chris Bosh has been largely ineffective, and everyone else has just been downright terrible.

That continued for the rest of the game, too. LeBron had a double-double with 31 points and 10 rebounds, while his supporting cast combined for 56 points on 20-56 shooting. Effort like that just won't get it done.

The reason the Heat lost this series was because the best player in the world didn't have any support, and it doesn't look like this current group for Miami has much left in the tank. It might be time for Pat Riley and the rest of the front office to start making some roster moves (outside of getting Carmelo Anthony) to get some better, younger role players.

3) One legacy cemented, one shaky, one growing?

Now with five career NBA championships and at least one title in three different decades, there's no doubt Tim Duncan is one of the best players of all time, and probably the best power forward ever.

This Finals loss was by no means LeBron's fault - I've already stated he's the only one who put up any sort of a fight against San Antonio - but his career Finals record is now 2-3, a number that is by no means special.

Maybe I'm just caught up in the moment, but this feels like a springboard to a great career. People could look back 10 years from now and say "Remember when Kawhi won his first title after going toe-to-toe with LeBron for two straight years?" the same way we talk about young Allen Iverson crossing up Michael Jordan or Kobe's performances during the Lakers' three-peat.

He has all the tools to be great and will carry the torch in San Antonio after Duncan, Ginobili, and Parker move on. Leonard still has a lot to improve on, but this feels a lot like the start of something bigger.

What do you think was the difference in Game 5 and in the series? What should Miami do to get better? Can the Spurs repeat? Tweet your responses to @brauf33.