3 Takeaways from Spurs vs. Heat Game 3 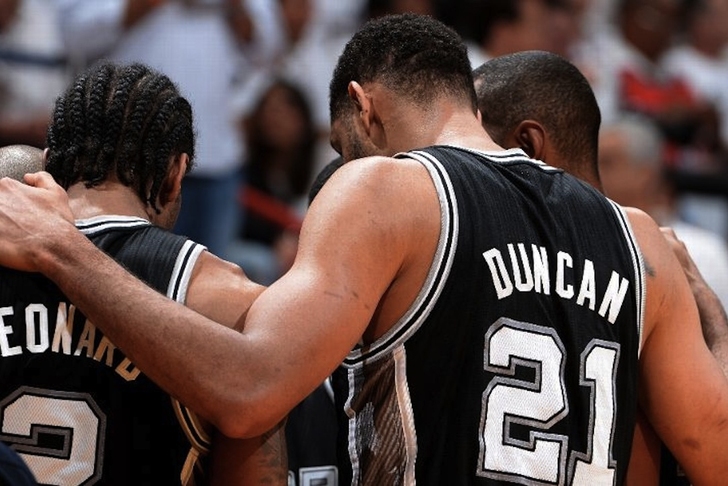 Miami responded from a Game 1 loss with a resounding comeback effort in Game 2 led by none other than LeBron James, setting the stage for a crucial Game 3 showdown.

Prior to this game, there had been 36 Game 3's in NBA Finals history with the series tied 1-1, and the winner of that game had gone on to win the title 30 of those times. San Antonio was one of the six who didn't win it all after beating Miami in Game 3 last year, but that didn't seem to deter them this time around.

The Spurs came out ON FIRE, hitting 19 of their first 21 shots and quickly built a 25 point lead, and were up 71-50 at halftime. The Heat started to seize control in the third quarter as they tried to mount the comeback and cut the lead to single digits, but San Antonio responded and were able to pull out the 111-92 victory.

Now that they hold the 2-1 advantage in the series, what can we expect going forward?

1) Confidence is a powerful thing

You know the two things analytics can't account for? Confidence and momentum. And those two things played the biggest factors in determining who won Game 3.

San Antonio got rolling in their incredible first half because Kawhi Leonard (career-high 29 points) - who had struggled so mightily this series on the offensive end - got hot and hit his first couple shots from the field. That gave the rest of the Spurs confidence, and once a few more shots fell, the floodgates were opened.

Everything started to go in because everyone expected it to go in. Shooting with that much confidence exponentially raises percentages, and it also creates momentum that San Antonio used to force turnovers on the other end of the floor. That, in turn, led to more easy baskets for the Spurs, and everything just started compounding on itself.

Miami responded with a mini-run of their own to get the lead back down to the 15-20 range for the rest of the half thanks to Rashard Lewis. He hit one three that turned into two and then turned into three, and suddenly the Heat had gained confidence and grabbed the momentum. Ray Allen hit a three and LeBron got a few buckets in the post but, unfortunately for them, they had dug themselves too deep a hole and the Spurs were too good for that to turn into anything more than simply keeping pace with San Antonio.

2) Miami can't afford any defensive lapses in this series

The talk after the Heat's victory in Game 2 was about how, other than the fourth quarter in Game 1, Miami had outplayed San Antonio.

But their poor defense in that quarter reared it's ugly head again in the first quarter of Game 3, and the result was the same.

The Spurs are so good offensively that all of your rotations have to be sharp and crisp, and you need to contest every shot or else they will make you pay. In a series between two teams this evenly matched, allowing the opposition to go on spurts like that will kill you unless you can go on similar spurts.

Miami certainly has the potential to, but San Antonio's constant defensive intensity won't allow them to do it. The Heat need to be sharp defensively 100% of the time for the rest of the series to get their three-peat.

After Game 1, many people seemingly conceded the title to the Spurs because of how good they looked in that fourth quarter. They'd surely come in and win Game 2 since they were the better team and were at home, where they'd only lost once all postseason.

After Game 2, the story became how Miami was so much better than San Antonio with LeBron James on the court. They'd surely win Game 3 since they were undefeated(!!) at home in the postseason and had grabbed the momentum in the series.

Then the Spurs came out and immediately shattered that notion with a 41-point first quarter and 71-point first half, cruising to the easy victory.

You'd think after theirback-and-forth series last year that was just as unpredictable, we'd learn by now. It seems like San Antonio has proven they're the better team now, but my guess is Miami comes back and wins Game 4 in fairly convincing fashion.

Who knows? Maybe they'll throw us a curveball and give us what we expect.

Oh, well. It makes for some drama no reality show can match, that's for sure.

Here's to Adam Silver extending the Finals to a best-of-11.