3 Takeaways from Pacers vs. Heat Game 3 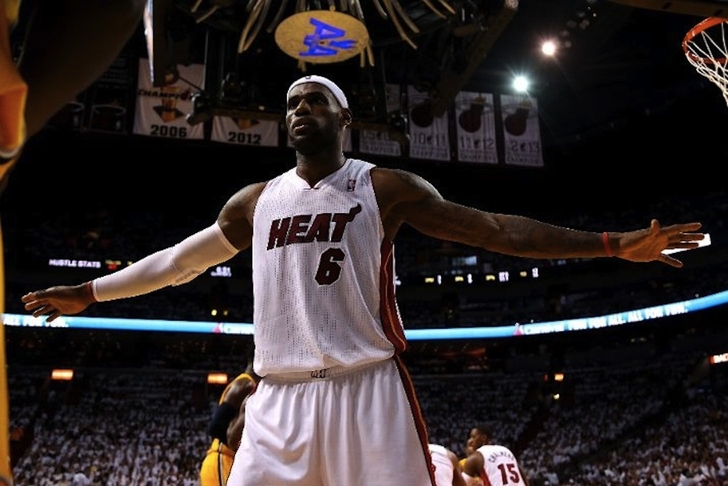 Miami used a big fourth quarter rally to earn the 1-1 split in Indianapolis on Tuesday night, and were looking to keep their momentum going in Game 3.

Indiana came out on fire and built a 17-4 lead that ballooned to 37-22 with just over six minutes left in the first half, but LeBron James spurred a Miami run to close the half the cut the lead to 42-38 at halftime.

The Heat continued their dominance and hot shooting in the second half - particularly in the fourth quarter - as they cruised to a 99-87 win to take a 2-1 series lead.

Indiana certainly didn't look up to par, but there's a lot more than that to take away from Game 3.

The Pacers have gotten shaky play their star Paul George in the series, and Roy Hibbert has been wildly inconsistent in the postseason. Their constants have been the reliable David West and - you guessed it - the wild card that is Lance Stephenson.

He was the catalyst in Game 1 and was then the best player on the court for almost all of Game 2. In Game 3, when the rest of his team wasn't playing up to the level they should be, he took over in all aspects of the game.

Stephenson - who led the NBA in triple-doubles - almost had a double-double at half and finished with just 10 points, but had a team-high 11 rebounds and five assists.

Unfortunately for Indiana, this is the worst case scenario for them. For front office purposes, Lance will be a free agent after the season and might be able to garner more money than the small-market Pacers would like to pay him - and he's using this series as his showcase.

On the court, he's been the best because of this stellar play, but also because of other key guys on Indiana coming up short. The Pacers need everyone to be their best in this series, and that isn't happening - which will send them home (and make Lance a free agent) sooner than they would've liked.

One of the biggest storylines coming into this season was whether or not LeBron was going to get enough help from Wade for Miami to pull out the series. Some pundits even said this Heat team was just like James' in Cleveland where he didn't have a lot of help.

Dwyane Wade apparently took those words to heart. And all the rest head coach Erik Spolestra has given him as helped, too.

Wade had looked like his body - particularly his knee - was starting to fail him in Miami's 2013 playoff run. As a result, Spolestra started taking precautions with him during the regular season (not playing Wade in the second game of a back-to-back, limiting his minutes, and not playing him is he wasn't 100% healthy) a la Gregg Popovich in hopes of keeping him fresh for the playoffs.

Miami didn't much from Wade as they cruised through the first two rounds, but he's come through when the Heat have needed him. He scored 27 points in their Game 1 loss, but followed that up with 23 in their Game 2 win  - and he continued his strong play with 23 points again in Game 3.

Wade hasn't been as good as LeBron, but he's been better than everyone else on the Pacers - which is why Miami has a better chance than they should to win this series.

3) It's been a series of runs, and no one can match Miami's spurtability

For those unfamiliar with the term "spurtability", its a basketball term used to describe a team's ability to go on runs that change a game. For instance, Miami might be down by seven points with four minutes left in the third quarter, and they'll close the quarter on a 17-3 run to take a seven point lead.

And that's exactly what they've been doing all series.

Indiana has, for the most part, been the better team in the series. They've jumped out to big leads and played in front for the most part, but the Heat always seem to go on those spurts that turn the game around in the blink of an eye and leave the Pacers scrambling to recover.

It happened to end the first half: Indiana had a huge lead and had been dominating Miami all night, then the Heat suddenly got hot from nowhere and closed the half on a 16-5 run - and only trailed by four at the break.

The Heat kept the momentum going in the second half on their way to the win because Indiana doesn't have the firepower to counterpunch these Miami runs with runs of their own. The Pacers need to play well for 48 minutes and avoid these lapses if the want to get back in the series.