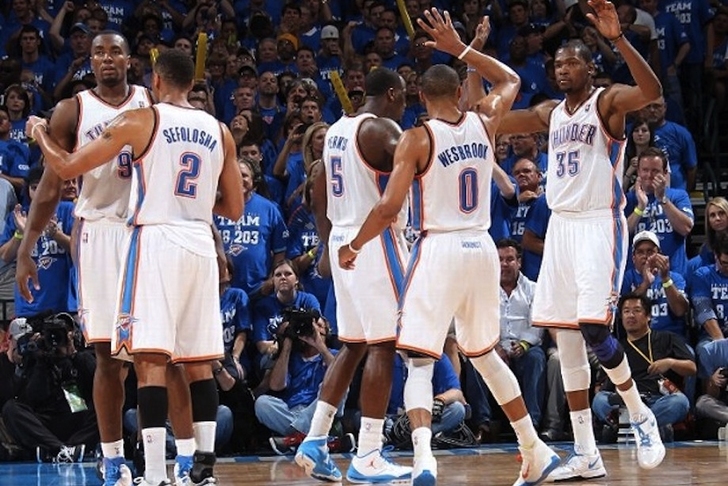 The Thunder were on the ropes in Game 3 after getting blown out in the first two games and fight for their series lives.

OKC got out to a good start thanks to the return of All-Star power forward Serge Ibaka, but it was Kevin Durant and Russell Westbrook who really stole the show.

KD finished with 28 points and Russ did with 27 on their way to a 106-97 blowout of the Spurs with Tim Duncan recording only 17 points and eight boards with Tony Parker's six points and three assists.

All-Star Serge Ibaka's return to OKC's starting lineup might be the main reason for this change of direction, but not as big as we might think.

1) Ibaka doesn't make as big of difference as we think

The Thunder showed signs of life in Game 3, and the return of All-Star Serge Ibaka can be easily credited as the reason why. He did have a big impact, but he's not the reason why Oklahoma City became competitive.

The biggest reason is that Kevin Durant and at least one other player became effective.

Ibaka gave you more than you could've imagined with 11 points on 5-11 from the field with 12 rebounds, but Durant returned to being his MVP self. He score 28 points, and he managed to get help from none other than Russell Westbrook (27 points) as they formed the two headed-monster that were the spark for the Thunder.

Ibaka had impact on the defensive end with his presence, but everyone else played hard and gave 100% effort on that end of the floor, which led to them stopping San Antonio. Stops lead to great transition opportunities, where OKC is great, which is why they were able to score a lot of points - everyone else stepped up at home.

2) The benches will decide the series

The Spurs' reserves absolutely destroyed Oklahoma City in the first two games of the series, but Game 3 flipped the other way for the Thunder.

Manu Giniboli had a great game for San Antonio with 23 points in the game - including 20 in the first half - but OKC was able to match that production.

Reggie Jackson & Co. had a big impact on the game by providing extra points while Durant and Westbrook took a much needed break. Russ & KD pretty much carried OKC (as they usually do), but their bench gave them just enough to pull out the win.

San Antonio's bench had the edge in Games 1 & 2, and OKC was able to flip that advantage in Game 3 - notice that whoever's bench wins the game, wins the game.

This is the main area both teams need to focus on to pull this close series out.

The Spurs were able to make their big runs in the first two games of the series via ball movement that led to open shots beyond the arc. In Game 3, those open opportunities were much more limited.

San Antonio hit nine three's in the game, but weren't able to capitalize as the Thunder minimized that advantage.

Oklahoma City was able to eliminate the extra points the Spurs got during mid first/second quarter spurts, which resulted in OKC being able to keep a sizable lead. San Antonio isn't a team that's built to come from too far behind, and once it got to that point, head coach Gregg Popovich pulled his starters in hopes of saving them some energy towards the rest of the series.

OKC's bench won this game, and they"ll have to maintain their inspired level of play if they plan on overmatching San Antonio and winning this series.