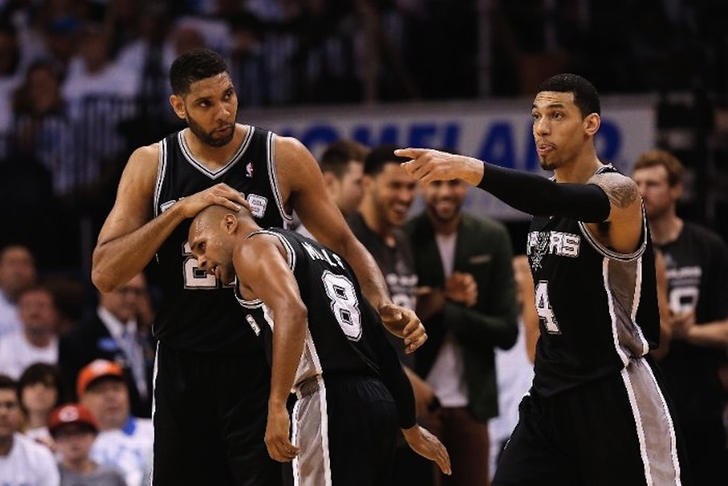 Oklahoma City came into Game 6 looking to keep their season alive following yet another blowout loss in San Antonio, and it took overtime to settle this one.

The Thunder took a 49-42 lead into halftime, but the Spurs came out blazing in the second half and held a double-digit lead in the fourth quarter. OKC managed to draw even and force overtime after Manu Ginobili missed a shot at the buzzer.

However, it seemed as though the comeback took everything out of Oklahoma City. They only scored one field goal in overtime as the Spurs grabbed the 112-107 win that put them into the Finals against the Miami Heat for the second straight year.

They accounted for 102 of Oklahoma City's 107 total points, as no one else on the team really contributed anything (Derek Fisher had the team's other five points).

It was the exact opposite for San Antonio.

Their best player, Tony Parker, sat for the entire second half and overtime with a sore left ankle, yet the Spurs still managed to make a comeback and take a big lead. Kawhi Leonard stepped up to score 17 points and chipped in 10 rebounds.

They also got major contributions from Boris Diaw (26 points), who led San Antonio's bench that held a 49-5 advantage over Oklahoma City's.

Game 6 was a classic case of a total team effort against a few stars, and the team is going to win that battle every single time.

We all know about Westbrook's amazing offensive skills (which he sometimes limits with bonehead decisions, but still), but his ability to totally disrupt the opponent's offense might just be his best attribute.

He bothers Tony Parker and makes it harder for him to run San Antonio's offense, and when he's off the ball, he breaks the Spurs' rhythm by disrupting passing lanes.

That hurts anyone's offense, but it's especially lethal against Gregg Popovich's squad. Their offense is supposed to run like a well-oiled machine, with guys cutting, setting both on- and off-ball screens, and finding the open man.

It's a natural basketball flow, and it's beautiful to watch when it's run well - Westbrook almost singlehandedly doesn't let it run well.

Because of his amazing activity on that end of the floor, he finished the game with six steals (including four in the first half), which led to easy chances for the Thunder at the other end and helped OKC gain momentum.

LeBron James was able to do the same thing for Miami in the Finals a year ago, and it's something San Antonio needs to figure out.

The one consistent thing you always hear about the Spurs more than anything else is that they're old.

Popovich is able to handle that with his schemes and the great way he limits the playing time of his older stars. The one thing he can't make up for is the way that age plays on the court.

They're a step slower than the Thunder's younger, more athletic guys, and when OKC plays lineups with more of those younger guys, they have more success.

Derek Fisher saw a lot of playing time in the game, but San Antonio was able to outscore the Thunder by nine points when he was on the floor. Fisher's older and can't rotate out to shooters, handle screens, or guard someone one-on-one that well anymore because most of his athleticism is gone. That's much of the same reason veteran Caron Butler didn't see the floor today.

They eliminate OKC's advantage over the Spurs, and the Spurs will win an even matchup every time.

But with younger lineups on the floor for Scott Brooks, they're able to do all of those things better. More of San Antonio's shots are contested and more three-point shooters are run off the three-point line to take contested two's (a great defensive play based on percentages and advanced metrics).

The Spurs also had problems last year with Miami's athleticism, and it's something they're just going to have to work around because they aren't getting any younger.

What did you takeaway from Game 6? Will the Spurs get their revenge on Miami? How would you fix OKC? Tweet your thoughts to @brauf33.

3 Takeaways from Heat vs. Pacers Game 6 – What threats will Miami pose to San Antonio?