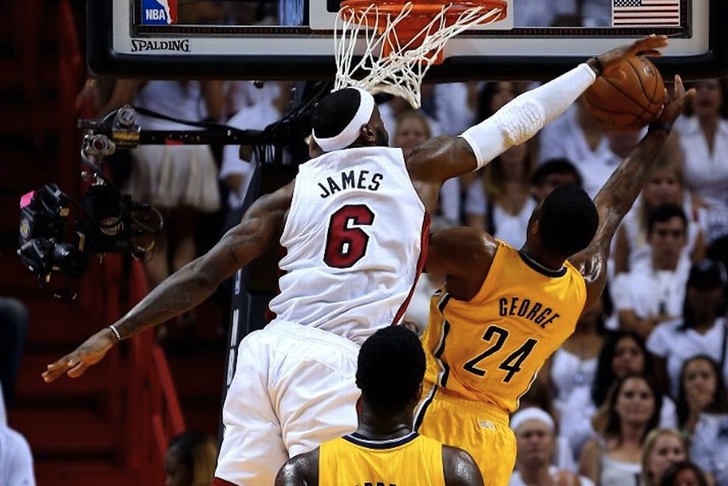 Indiana managed to keep their season alive with a 93-90 win over Miami at home in Game 5, and it looked like they may have turned the corner with their great second-half comeback.

Miami absolutely destroyed any sense of hope the Pacers in the first half as they grabbed a 30-point lead in the second quarter and coasted to the way-to-easy 117-92 win to clinch the series.

The Heat now have won the Eastern Conference and advance to the NBA Finals for the fourth straight year, while Indy has had their season ended by Miami for the third straight season.

Game 6 was U-G-L-Y, but there are still a lot of positives the Heat can take with them to the Finals, as well as negatives the Pacers will have to try and correct in the offseason.

Miami has been able to spread Indiana's defense out since inserting Rashard Lewis into the starting lineup. Lewis is - percentage-wise - one of the best three point shooters in NBA history and plays the four position.

This creates matchup problems for both David West and Roy Hibbert who now both have to guard perimeter orientated players, taking them away from the basket. That opens up driving lanes for LeBron, D-Wade, & Co., and the point of having the two bigs (especially Hibbert) on the floor is to protect the rim and close those driving lanes.

Going so small also manages to speed the overall tempo of the game up, which leads to both teams taking quicker shots. And the less time an offense uses, the less likely they are to run said offense through the post and give your big guys the touches they need to keep them engaged.

Eventually, the small team takes the bigger team out of what they do best and gets them out of rhythm, and therefore out of the game.

What makes the Heat so tough is that they know what they do well and don't stray away from it.

They're an attacking offensive team that tries to get to the rim and foul line as much as possible, and you very rarely see them differ from that game plan. When opponents key in on that, they have enough shooters on the perimeter - and most importantly, guys who are unselfish enough to make willing passes to those shooters - to kill you.

They've become champions by sticking to that, but also by doing everything they can to limit the opposition's strength .

Being the small team they are, Miami knew they were going to have to work extra hard on the boards to cancel out any advantage Indiana may have. They got it done, outrebounding the Pacers by 9. They also packed the paint defensively to take Indy's strong inside game away, and it worked as they outscored them in the paint 50-28.

Champions are made by playing to your strengths and taking your opposition's away, making whatever sacrifices you have to along the way.

Miami has done that. Indiana has not.

And that's why the Heat are going to their fourth straight Finals.

3) The Pacers need to blow it up

For a team that has so much talent, they were billed as being a collective unit that had great chemistry, which is why they could challenge the Heat. They were the 2004-2005 Detroit Pistons all over again - five talented players that were successful because of how well they played together.

Well, since January, that clearly has not been the case.

They've been wildly inconsistent and didn't show any fight or motivation in so many games, which are tell tale signs of internal problems.

But on top of the chemistry questions, everyone's play on the court hasn't helped their case either.

Paul George was supposed to be a superstar and was for a few months, but then he returned to being an above average player.

Lance Stephenson emerged as a nice piece, but his on-court antics and off-court questions might be too much to keep him.

George Hill is still inconsistent and hasn't proven he can be a good point guard on a contender.

Roy Hibbert became the butt of jokes - and rightfully so.

David West is safe as the heart and soul of this team, but everyone else has shaky futures in Indiana - some more than others, obviously.

Still, this squad proved they don't have what it takes to win a championship. It might be time to shake things up a little bit.

What did you takeaway from Game 6? How will Miami fare in the Finals? What does Indiana need to do to get it right? Tweet your responses to @brauf33.

3 Takeaways from Spurs vs. Thunder Game 5 - What will affect a potentially decisive Game 6?