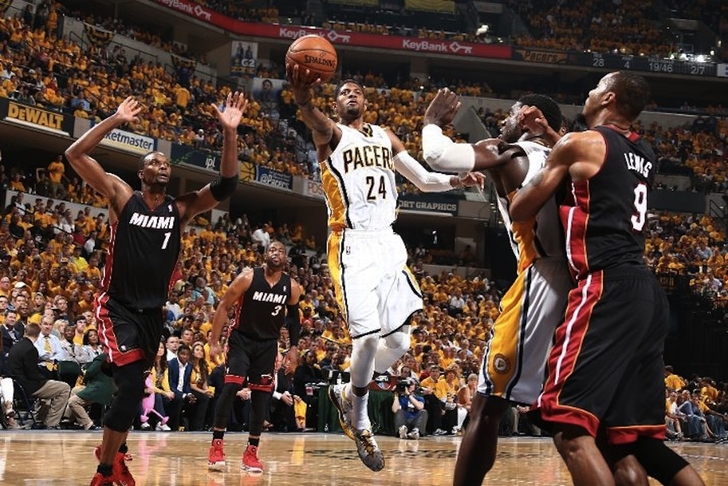 Indiana came into Game 5 needing a win to keep their season alive, and they did so by the slimmest of margins.

They started off hot and had a double-digit first quarter lead, but their offense stalled in the second as Miami came back to take a 42-33 advantage into the halftime break. The Pacers responded with a run of their own to take an 11-point lead in the fourth quarter, and were able to hold off a furious Heat rally to get the 93-90 victory.

Miami still holds the 3-2 series lead going back to the American Airlines Arena, but the Pacers finally have life - as well as some things they can take away from Game 5.

The Thunder don't really run an offense and rely on a lot of isolations from Kevin Durant and Russell Westbrook. It works for OKC because those two are some of the best shot creators and makers in the league.

Indiana doesn't have those type of players on their roster (you could argue Paul George, but he's inconsistent in that area), and their lack of movement often leads to a forced shot at the end of the shot clock.

They might run a high pick-and-roll at the top of the key to give the ballhandler some separation from their defender, but that's usually the extent of it. Indy needs to set some off-ball screens and have a few cutters to create more offensive movement, which would help them score more points.

2) Force-feeding Roy Hibbert will NOT make your offense better

Roy Hibbert has supplanted Dwight Howard as the best defensive center in the league, but he is still extremely limited offensively. He complained about not getting enough touches after Game 4, but you're just not going to get touches every possession when you can't make a shot around the rim.

For guy who takes a good majority of his shots around the basket, you're expected to shoot over 50%. In Game 5 - with the Pacers feeding him the ball to make him happy - Hibbert finished with 10 points on 4-11 from the field.

It makes sense to go to him more than normal against a team as small as the Heat, but Indy needs to understand who their offensive threats are. Hibbert isn't one, and he just doesn't have the skills to be.

3) Turnovers have as big an impact on winning as anything

When the Pacers struggled in the first half, it was because they turned over 10 times. That led to a bunch of transition opportunities for Miami, which let them get some easy points.

Miami had almost all of their 17 turnovers in the second half, which in turn led the Pacers to easy baskets and let them back into the game.

Worse for the Heat, the easy baskets brought the crowd back into the game, which gave even more life to Indiana.

The effect compounded on itself, allowing the Pacers to grab the momentum they had been lacking in the series.

Where has this Paul George been all series?!?!?!?!

This is the kind of effort they need from him if they're going to pull off this miraculous series comeback.