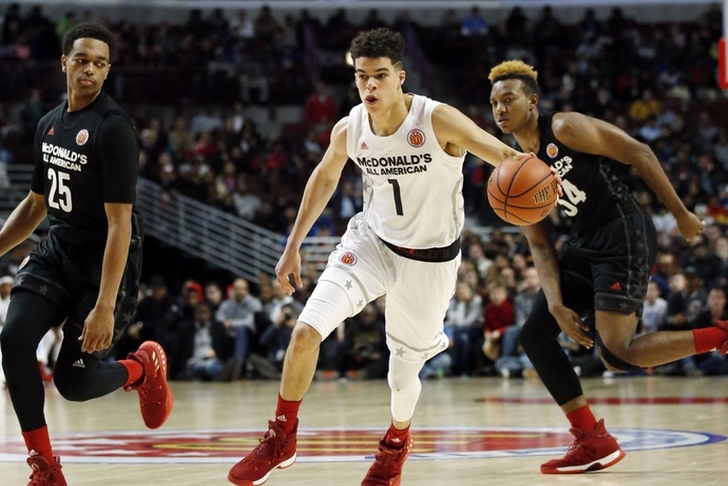 The 2017 NBA Draft is over, which means it's time for a 2018 Mock Draft. Sure, the next draft is a year away, but it's never too early to take a look at the top prospects teams may be tanking for. While next year's class doesn't figure to be as strong as the 2017 class, it's still shaping up to be a quality class.

The order is based on the 2018 NBA title odds, so the real order will probably be much different. But, for right now, that's what we're going with. This is really a look at what the future needs for teams could be and what prospects could be first round picks, and here will be changes, but this where these prospects stand going into the college basketball season.

Without further ado, here are our way-too-early first-round projections for next year's draft with trades accounted for:

Porter is a dream prospect for whoever gets the No. 1 pick in the draft. He's a good, fluid athlete who excels on the perimeter and around the basket with his smooth skill set. Unfortunately for college basketball fans, he may turn into this year's Ben Simmons or Markelle Fultz because of the team he plays on.

Doncic is the biggest threat to Porter for the No. 1 pick. His all-around game made him the youngest player to ever record a double-double in ACB history, and has great size and vision for the position.

The best true center prospect we've seen in some time, Ayton is a highly skilled big man who still has plenty of upside. Though he's not a super athlete, he's a good athlete with reliable post moves.

The preseason favorite to win National Player of the Year, Bridges was going to be a lottery pick in the 2017 draft before opting to return to school. Bridges is hoping to work on his all-around game, but is a freak athlete who is excellent finishing around the rim.

Bamba will really benefit from Texas' weight program, as he really needs to get stronger, but is a game-changing shot-blocker.

Duval is an elite athlete with outstanding quickness, vision and a high basketball IQ, but his skillset is still developing. He has gotten by in his career due to his superior athleticism and needs to improve his shooting and finishing ability.

There's a reason why Knox was one of the most sought-after prospects in the country this year. He has great size for a combo forward and is a good athlete, but needs to get stronger and improve his basketball IQ.

Diallo was eligible for the 2017 draft despite not playing a single game at Kentucky because he enrolled early after a semester of prep school and probably would have been a first-round pick due to his athleticism, but opted to return to school. He's only going to help his draft stock by showing that athleticism against college competition.

Carter is big and strong enough to play center, yet is also athletic enough and has enough touch on his jumper to play power forward. Fundamentally sound, he can do everything he wants on the court - when he wants to. His motor is the question with him.

The first real marquee prospect to play for Jim Larranaga at Miami, Walker has all of the physical tools and athleticism to be a star in both college and the NBA. However, he needs the ball in hands to be effective and can improve his shooting.

Like Diallo and Bridges, Williams is a super athlete who may have been a first-round pick if he stayed in the 2017 draft, but opted to return to school to work on his consistency. That athleticism and shot-blocking ability makes him an intriguing prospect.

Sexton could easily go higher than this, but I think he'll fall a bit because of his size. Still, he's a dynamic athlete who is exciting to watch because of his quickness, vision, finishing ability and defensive quality. Perhaps the most competitive player in this class.

Jackson also withdrew from the 2017 draft and should improve his stock now that he's Maryland's go-to guy. He was used more as a post player as a freshman last year, but has the athleticism, ball handling and shooting to play on the perimeter as well.

A freak athlete and shot-blocker, Robinson is still very raw at this point in his career - but the upside is obvious.

Metu was the star of USC's NCAA Tournament run, but opted to return to school to improve his draft stock. He's an intriguing athlete for NBA teams due to his quickness, size and athleticism, though is still raw offensively.

Another player who put his name into the 2017 draft before withdrawing, Jones needs to improve as a shooter and turn the ball over less, but his athleticism and upside are intriguing. Teams are expecting him to take a big step forward this year.

Just by looking at his measurables, you know that Bonga needs to get stronger. But, he's not 18 years old yet and is a gifted finisher and passer. His jump shot also needs some work.

Brown has great size for a shooting guard and can do a little bit of everything on the court, especially as a smart passer and defender. However, he's just an average athlete and needs to improve his consistency.

An excellent addition for Michigan State, Jackson has a 7-foot-4 wingspan and is a great athlete, giving him a ton of defensive upside as a shot blocker. He's competitive on the glass, runs the floor well and is a good finisher, yet needs to play stronger and improve his shooting.

Brown is small as a shooting guard at 6-foot-3, but makes up for it with a 6-foot-9 wingspan and elite athleticism. If he can become more consistent as a three-point shooter, he will be a lottery pick.

Another international prospect who needs to get stronger, Muza has a high basketball IQ and is an aggressive scorer who can fill it up from anywhere on the court.

Kurucs was projected to be a first-round pick before pulling out of the 2017 draft at the last minute. He has good ball-handling ability and is a knockdown shooter that can create shots for himself.

The best name in the 2018 draft, Milton has great size and all-around game for a point guard prospect. He needs to be more consistent as a go-to scorer this year, but is a good and efficient shooter.

Richards has the potential to blossom into a star under John Calipari. He's a super athlete with long arms and has some touch around the rim, though may be better served as a shot blocker at this point in his development. Richards also doesn't have great feel for the game or a high basketball IQ.

College basketball's biggest villain is back for one more year after a disappointing junior season. Allen showed his tremendous scoring and athletic ability as a sophomore, then improved as a ball-handler as a junior despite seeing his production decrease. However, the biggest questions with Allen involve his size as a two-guard and his mental toughness (or lack thereof).

Melton exceeded expectations as a do-it-all player on both ends of the court as a freshman, and now that he's a full-time starter, USC is hoping he can take another step forward.

Battle showed flashes of promise during his freshman season, but was largely inconsistent for a Syracuse team that could never find a rhythm. He needs to improve his jumper and ball handling, though he's a quality defender.

Though he will be a senior, Mykhailiuk is only 20 years old, giving NBA teams an intriguing combination of youth and experience. Mykhailiuk is a shooter first, but became more of a solid defensive player last year and continues to develop more of an all-around game.

Forced to play off the ball at Kansas the last two years because of Frank Mason III, Graham will finally be able to play his natural point guard position in 2017-18. He's a good shooter and playmaker - and skill that should really stand out this year - but needs to improve as a slasher.

Though he plays a lot of power forward for the Wildcats, Bridges' NBA upside is as a defender. He's very quick for someone who is 6-foot-7, and with a wingspan over seven feet, he is an impact player on that end of the floor.