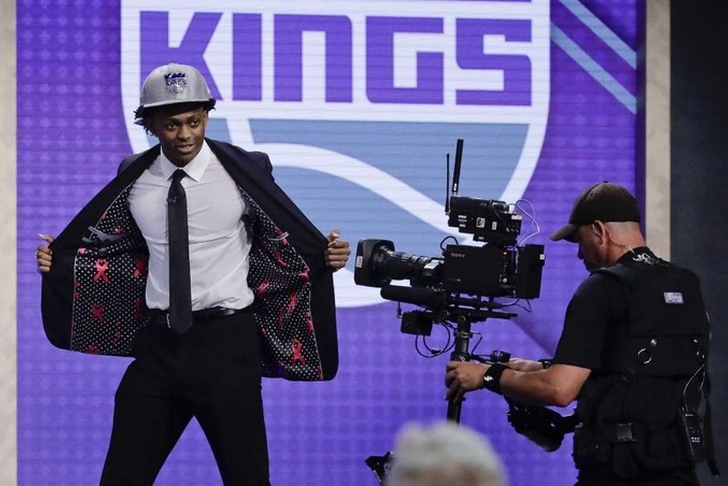 The 2017 NBA Draft is over, which means it's time to grade every selection from all 30 teams and take a look at the winners and losers. It was very much a chaotic draft weekend, with plenty of surprise picks and trades, and those moves will be included in these grades.

Every team's selection is listed below, with the round and overall pick included. As for the grading, teams don't get a B just for showing up. A "B" is a good pick, while an "A" is a great pick. A "C" is not bad in my eyes, it's simply average. Obviously there is a lot of opinion here, so feel free to debate me on Twitter.

Without further ado, here are the grades for every team:

This was a case of Atlanta taking the best player on the board. After trading Dwight Howard and Paul Millsap's free agency, it appears that they're ready to hit the rebuild button. Collins has a lot of problems defensively, but he's a quality offensive player. However, that Howard trade and moving so far back in the second round knocks their grade down a full letter.

Many were surprised Boston took Tatum over Josh Jackson, but he's a better fit. The Celtics need another primary scoring option, especially on the wing, and Tatum is the most dynamic scorer in this class. Ojeleye was a first round talent they got in the second round and will make an impact relatively quickly because of his versatile offensive game. Allen is a good defender and Bird is a shooter, but both are likely headed to the newly-minted G-League.

Basically flipping the No. 27 pick for D'Angelo Russell was a win, as was having Jarrett Allen slide to them at No. 22. He should step in and start immediately for the departed Brook Lopez, and should be part of a future core in Brooklyn. Vezenkov is a draft-and-stash.

This draft could not have gone any better for the Hornets. Monk is a top-five talent they got at No. 11, and will give them a needed scoring boost off the bench while drastically improving their three-point shooting. Bacon is inconsistent, but is another legitimate scoring threat on the wing. That was Charlotte's biggest weakness coming into the draft and they addressed it.

I like the Jimmy Butler trade for Chicago and what they got in return for him (Kris Dunn, Zach LaVine), but the Markkanen pick does little to excite me. It makes sense given their desire for more shooting and improved frontcourt personnel - I'm just not convinced he can have the impact you'd expect.

Cleveland didn't have a pick, but nearly pulled off a deal for Ivan Rabb at No. 34. They would have gotten an A+ if that had happened.

Dallas really wanted Frank Ntilikina, yet I think Smith was the better option for them. He has legitimate superstar potential thanks to his elite athleticism, quickness and finishing ability, giving Dallas a go-to scorer in the soon-to-be post-Dirk Nowitzki era.

I like the Nuggets acquiring Trey Lyles in their trade but the Jazz, but thought they moved back too far. Then they used their pick on Tyler Lydon, who plays the same position as Lyles and someone I don't think has much of a NBA future. Cancar is a draft-and-stash. Morris was actually a good pick and should stay in the league a while as a backup point guard.

The Pistons got the player they wanted in Kennard, who will give Stan Van Gundy another needed shooter and versatile offensive threat.

Leave it to the Warriors to get an A-grade even though they entered the draft without a pick. They paid $3.5 million to the Bulls to draft Bell, who is perhaps the best shot-blocker in the entire class. Considering that a shot-blocker is something Golden State lacks, this was a huge win for them.

Hartenstein was a first-round prospect, and though he's probably a draft-and-stash product, he has immense potential as a seven-footer who can do everything on the offensive end of the court.

Leaf was a solid pick, but a bit of a stretch in the first round. He will contribute immediately off the bench as a stretch four, though that's also likely his career ceiling. Indiana then went the other way with their second-round pick with Ike Anigbogu, who is pure upside as an athletic big man. That potential had him billed as a first-round prospect coming into the draft. Sumner also would have been a first-round pick before he tore his ACL.

The Clippers bought both of these second-round picks, and both are total steals. Jawun Evans was projected to go late in the first round (and probably would've gone in the lottery if he was a few inches taller), and his pick-and-roll play will earn him some playing time off the bench. It also helps that he has drawn comparisons to Chris Paul. Thornwell is a tough grinder, good defender and glue guy who should stick as well.

The Lakers made the smart move and drafted Lonzo Ball, who will be their point guard for the next 15 years. His vision and passing ability is a perfect fit for head coach Luke Walton's up-tempo system, and I think he's a budding superstar. Kuzma helps as a stretch four prospect, while Hart will bring a needed toughness and defensive stopper to the group (along with being a good shooter), immediately being a good bench guy for them. Bryant will be in the G-League.

Both Rabb and Brooks were good college players, but I'm not sure how they'll translate to the NBA. Both players will spend a lot of time in the G-League as they try to prove that their skills carry over from the college game. Is Rabb aggressive enough? How will Brooks hold up athletically?

Miami reached a bit for Adebayo here, but with his upside, athleticism, and versatility, I like the pick long-term for a Heat team looking for future stars. I'm unsure how he'll fit next to Hassan Whiteside, but Miami was one of the best landing spots for him. They know how to get the most out of their guys.

This was probably about 10 spots too early for Wilson, but Milwaukee isn't afraid to reach for a guy if they really like him (see Maker, Thon). Wilson is a 6-foot-10 stretch four who is a walking mismatch with his athleticism and three-point shooting - he just has to be more consistent. Much more consistent.

Obviously, adding Jimmy Butler as a huge get for the Timberwolves, but I didn't like how much they gave up to get him. I think they were better off being patient with ZaVine and Dunn than trading for Butler, who only has a few more years left in his prime. That said, I love the Patton pick. He's a good athlete with a ton of potential, and he already has a fairly high skill level - allowing him to play alongside Karl-Anthony Towns.

The Pelicans traded up in the second round to get Jackson, who has the potential to become a quality starter. An explosive athlete who can finish around the rim and has a good jump shot, he needs to fine tune his skills, but the talent is there. And, with Jrue Holiday's future uncertain, Jackson may have a chance to play a big role sooner rather than later.

Ntilikina will give New York a quality starting point guard for the next decade, and while I don't think he'll be a star, he'll be part of the Knicks' future core with Kristaps Porzingis. He was also New York's top target. Dotson gives the Knicks a shooter who may make the roster, while Jaramaz is a draft-and-stash.

OKC finished last in the NBA in three-point shooting last season, and that was an area they needed to address here. Ferguson is one of the best shooters in the entire draft, is from Tulsa and and some defensive upside with his athleticism. Solid pick.

Quality draft here for Orlando. Not sure how Isaac really fits here (will be fun to see if him and Aaron Gordon can play together), but he was the best player available and looks like he may be a star. Iwundu also gives them some value as an athletic defender off the bench.

Philly made the trade for No. 1 to get Fultz, who becomes part of the core and I think will be a franchise player. Simply put, he can do everything he wants to on the offensive end on the court. Pasecniks is a high-upside prospect who may stay overseas for a year, and same with Bolden and Lessort, but all three are very intriguing prospects. Brown will have a chance to stick because of his shooting and offensive skill.

Jackson was the smart pick for the Suns and should step in and immediately be their best defender, forming part of their young core with Devin Booker. Grabbing Reed so early was a HUGE reach, but Peters was a steal at the end of the second round, so they balance out.

To be frank, I didn't like these picks at all for Portland. They traded up to draft an impact player in the top 10, but I am not sold that Collins is that guy. It will take some time for him to adjust to the NBA game, he needs to get stronger and he needs to prove he can play well in extended minutes. A lot of people love his upside, and he is a good rim protector with post skills and a reliable jumper, so I don't give the trade a F. Drafting Swanigan, who plays the same position with limited upside due to his lack of athleticism, was also puzzling.

The Kings...had a great draft? What world are we living in?

De'Aaron Fox - Starting point guard who will turn into a star.
Justin Jackson - 3-&-D wing who's mature, skilled and can contribute immediately.
Harry Giles - Superstar potential when healthy (though it's a big if).
Frank Mason III - Tough leader with good all-around game, making him an excellent backup point guard.

Another great draft for the Spurs. White is an excellent combo guard with high basketball IQ, and Blossomgame could have been a top-20 pick last season if he went pro. A bad shooting season knocked him down draft boards, but he still has a lot of skill as a small forward and stretch four.

No one thought that Anunoby would still be on the board at No. 23 - he was projected to go as high as No. 13 - so getting him this late is tremendous for Toronto. They continue to look for defensive-minded small forwards, and Anunoby is now the heir apparent to the role currently held by P.J. Tucker.

A very, very good draft for the Jazz. They only had to give up Trey Lyles (who isn't even in their rotation) to move up to No. 13 to take Mitchell, who is an elite defender and has the potential to be a tremendous player. Drafting Bradley was a bit of a reach and puzzling considering that he needs another year or two of seasoning before he'll be NBA draft, but Williams-Goss was a smart pick at the end of the draft. He should make the team.

Washington had the No. 52 pick, but traded it to Indiana.