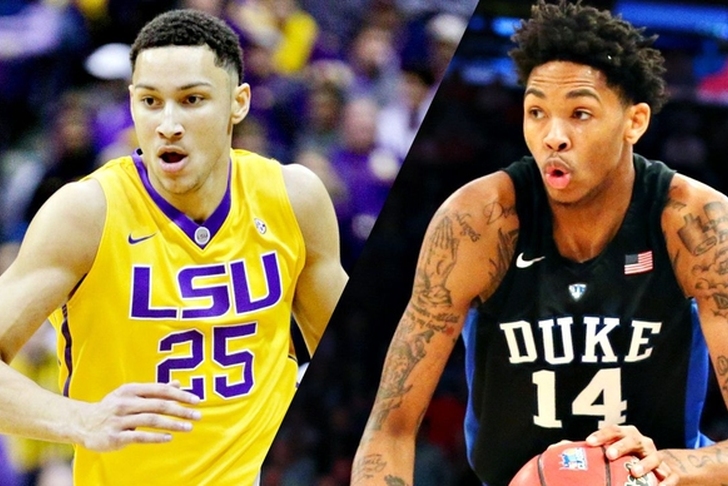 The 2016 NBA Draft is just a few short days away. Teams are scheduling the last of their workouts to get one last look at the prospects. This draft is set at the top, as LSU's Ben Simmons and Duke's Brandon Ingram will undoubtedly be the top two picks in the draft. But the rest of the draft is muddled and there's the potential for some real chaos, especially in the lottery.

Here's our shot at projecting the first round of the 2016 NBA draft:

1. Philadelphia 76ers: Ben Simmons, SF, LSU
Go ahead and pencil this one in. The 76ers will take Simmons and hope he can develop into a superstar.

2. Los Angeles Lakers: Brandon Ingram, SF, Duke
Pencil this one in as well. The Lakers reportedly would have taken Ingram No. 1 overall, and they're happy to have him at No. 2. He's a perfect fit with their roster.

3. Boston Celtics (via Brooklyn Nets): Jamal Murray, PG/SG, Kentucky
This is where the draft truly starts. The Celtics could go in a number of directions, from a trade to taking several players. It's likely one of these five: Kris Dunn, Jamal Murray, Marquese Chriss, Jaylen Brown and Dragan Bender. Murray's shooting is something the Celtics need and that's why he's the pick. Plus, a team like the 76ers could swing a deal to land Murray. He can play PG or SG, but SG might be his best fit. His defense needs work, but could form a potent duo with Marcus Smart early in his career.

4. Phoenix Suns: Marquese Chriss, PF, Washington
The Suns have a major need at PF, and the Huskies prospect is rising quickly. While Brown and Bender are also options, Chriss seems to be the most likely at the moment. He needs to develop, but the Suns can afford to wait. There are rumblings the Suns think Chriss could be a SF at some point.

5. Minnesota Timberwolves: Kris Dunn, PG, Providence
Dunn has disputed a report that he wants to avoid the Suns and Celtics, but that could happen on draft night. Minnesota is reportedly enamored with Dunn. He can be the team's point guard of the future and they could trade Ricky Rubio this offseason. Dunn is easily the top point guard prospect in this draft and shouldn't fall outside the Top 6. He can contribute right away.

6. New Orleans Pelicans: Buddy Hield, SG, Oklahoma
Hield is the last of the top-flight guards this year. The Pelicans badly need guard help and Hield can contribute right away. While the Pelicans might prefer Dunn or Murray (and will take one if they're on the board), Hield is a nice consolation prize.

7. Denver Nuggets: Dragan Bender, PF, Croatia
The Nuggets aren't likely to swing a trade and Bender is a logical pick for them. The potential is there for the 7-foot-1 power forward, who could be the next great European forward. He's raw and needs work, but the Nuggets can wait for him. He's not a perfect fit at the moment, but he will be in a few years.

8. Sacramento Kings: Jaylen Brown, SF, Cal
Brown could go anywhere from No. 3 to No. 8. Brown isn't the best fit in Sacramento with Rudy Gay in town, but if he falls this far, the Kings will gladly snatch up a player with his upside. He didn't deliver on his hype in college, but he has all of the physical tools to be a dominant force. He needs to work on his shot, but has the potential to be a star. The Kings would love for one of the guards to fall to them. If Brown goes before this, it might be Hield.

9. Toronto Raptors (via New York Knicks) - Jakob Poeltl, C, Utah
The Raptors need another big, especially with Bismack Bioymbo likely to leave. Another big (Henry Ellenson?) is also an option, but Poeltl is more NBA-ready. The Raptors are ready to win now and Poeltl can be a key rotation player right away.

10. Milwaukee Bucks: Henry Ellenson, PF/C, Marquette
There's some stretch-four potential here with Ellenson given his shooting ability, but he might be a bit too slow to truly play at the 4. Instead, he might be more of a stretch five. He'd be a solid fit next to Jabari Parker. Plus, the Bucks need shooting and the other wing options are all reaches at this point. Greg Monroe has been a disappointment at center.

11. Orlando Magic: Skal Labissiere, PF/C, Kentucky
Labissiere is a classic boom or bust pick. He can do almost everything, from shooting to blocking shots. However, he's super raw and needs time to develop. He'll either develop into a raw floor-stretching shot-blocker or flame out. The Magic are in a position to take that risk and he could be a wonderful fit next to Nikola Vucevic.

12. Utah Jazz: Wade Baldwin, PG, Vanderbilt
The Jazz don't have any major needs, meaning they can take the best player on their board. They want to make the playoffs this year, and adding someone like Baldwin could help. Baldwin can play alongside Dante Exum if needed and he'll be an upgrade over Raul Neto and Trey Burke.

13. Phoenix Suns (via Washington Wizards): Damontas Sabonis, PF/C, Gonzaga
The Suns went with Chriss earlier, but they might add another big early. Sabonis can play either PF or Center, and that versatility will help. He can PF if the Suns go with Alex Len at center, or at center when Chriss plays. Phoenix needs some toughness inside and that's what Sabonis brings.

14. Chicago Bulls: DeJounte Murray, PG/SG, Washington
Much like his fellow Huskie in Chriss, Murray has plenty of potential. It's unclear if he's best at PG or SG, but the combo guard would help the Bulls. Derrick Rose and Jimmy Butler's long-term futures are very much in doubt, and Murray could replace either. He needs some time to develop, but is worth the risk here.

15. Denver Nuggets (via Houston Rockets): Timothe Luwawu, SG, France
Luwawu might not come to the NBA right away, although he is already 21, but he'd be a good fit for the Nuggets either way. They need wing help and Luwawu has potential. He has an impressive 7-foot-2 wingspan.

16. Boston Celtics (via Dallas Mavericks): Deyonta Davis, PF, Michigan State
Davis fits what the Celtics like: length, upside and athleticism. The team needs at least one more big this offseason. He could go earlier than this and it'd be a surprise to see the Celtics pass on him, barring a trade. Several teams are looking to move up from the mid-to-late 20s, and the Celtics could be a team that moves down.

17. Memphis Grizzlies: Malachi Richardson, SG, Syracuse
The Grizzlies reportedly love Richardson, and may have already given him a promise. He has upside and the Grizzlies need his shooting potential. A big to eventually replace Zach Randolph is also an option.

18. Detroit Pistons: Denzel Valentine, SG/SF, Michigan State
The Pistons reportedly love Valentine, but worries about his knees could cause him to drop. If the Pistons pass on Valentine, they'll likely target a big man.

19. Denver Nuggets (via Portland Trail Blazers): Furkan Korkmaz, SG, Turkey
With an already young team and three draft picks, the Nuggets will likely take at least one draft-and-stash player. That could be Korkmaz, who is just 18 and could be in play for their No. 15 overall pick. He's one of the better shooters in this year's draft.

20. Indiana Pacers: Juan Hernangomez, PF, Spain
The 20-year-old stretch four is a late riser. The Pacers lack a true PF and he'd be a quality fit next to Myles Turner. He could even end up going a few picks earlier than this. A point guard is also an option.

21. Atlanta Hawks: Ante Zizic, C, Croatia
Zizic is thought of as one of the best international prospects in the draft because of his athleticism at his size along with excellent rebounding skill. He's just 19, but the Hawks are the type of team willing to let him develop. He might be a draft-and-stash.

22. Charlotte Hornets: Ivica Zubac, C, Bosnia
Here's the other international big with a last name that starts with a 'Z.' Both Zubac and Zizic are raw with plenty of potential. The Hornets might be willing to take a risk on a project who should have waited another year.

23. Boston Celtics: Thon Maker, C/PF, Australia
If the Pistons pass on Valentine, he could end up in Boston. Maker is one of the most raw prospects this year, but he has loads of potential. The Celtics have several picks and can afford to take the risk with Maker. It might be best if he spends a year or two in the D-League.

24. Philadelphia 76ers (via Miami Heat): Malik Beasley, SG, Florida State
The 76ers need shooting in the worst way and that's what Beasley provides. He can step right in and give the Sixers the dynamic, athletic shooter they've been looking for. The rest of his game is still raw, but he has the potential to become a very good player.

25. Los Angeles Clippers - Cheick Diallo, PF, Kansas
Diallo would have been better off returning to Kansas for another year. He's raw and athletic, but needs developing. This might be too low for Diallo, who could go in the Top 20. The Clippers could try to move up.

26. Philadelphia 76ers (via Oklahoma City Thunder): Demetrius Jackson, PG, Notre Dame
And here's the point guard the Sixers badly need. Jackson could go earlier than this, and he'd be a solid fit alongside Beasley and Simmons. I'd love for this pick to be Tyler Ulis, but he's just too small in both height and weight.

27. Toronto Raptors: Taurean Prince, SF, Baylor
A draft-and-stash makes sense for the Raptors, but this is too good of value to pass up. Prince could go in the early 20s, and this gives the Raptors another combo forward for depth. If the Raptors do go the foreign route, Zizic, Zubac or even France's Guerschon Yabusele make sense.

28. Phoenix Suns (via Cleveland Cavaliers): Zhou Qi, C, China (International)
This is another draft-and-stash pick. Yes, the Suns have gone heavy on bigs, but unless Luwawu falls here, someone like Qi makes sense. Qi desperately needs to add strength before coming to the NBA, but his size and solid offensive game is enough to have some scouts raving about his potential. However, there are some rumblings he's older than the 20 he claims to be.

29. San Antonio Spurs: Malcolm Brogdon, Sr., SG, Virginia Cavaliers
Brogdon is classic Spurs player. His elite basketball IQ and defensive ability, combined with an underrated offensive skill set, make him the perfect fit in San Antonio. The Spurs are rumored to want to trade up and could look for some more front court help.

30. Golden State Warriors: Damian Jones, C, Vanderbilt
Anderson Varejao and Festus Ezeli are both free agents, with the latter likely to chase money elsewhere. Jones is a skilled 7-footer and can help stretch the court in the way the current Warriors' centers can't.