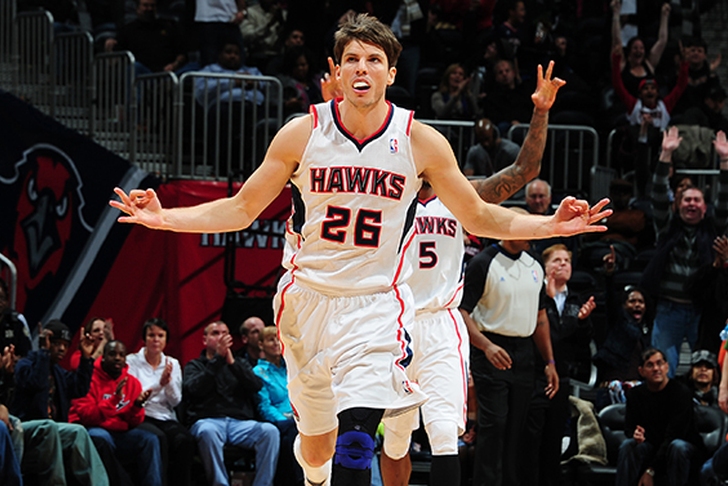 With an unbelievably stacked field containing some of the best 3-point shooters in the history of the NBA, the 2015 three-point shootout is quickly becoming the most anticipated event of All-Star Weekend. Here's what Vegas has to say about the field:

You know it's gonna be wild when the defending champion is near the bottom, along with the #3 and #5 players in total threes made (Matthews and Harden, respectively).

It's hard enough to pick a favorite...let alone predict the winner...but here are a few things to keep in mind:

- Although he's the Vegas favorite, Curry hasn't had a lot of success in three-point contests in recent years. While his technique and release timing would appear to give him a major advantage, he's primarily a rhythm shooter and was thrown off his rhythm by the one-minute countdown timer last year.

- Irving is probably the streakiest of the bunch. He shot .464 from behind the arc in November, .258 in December, then .485 in January. He's hitting about 41% of his threes over his last five games.

- Redick's .437 percentage so far in 2014-15 is the best in his career to date (and surprisingly, it isn't that close). He's had some back issues recently, though, and it sounds like his team is pushing him to sit out.

- Harden's shooting from distance has improved every month of the season so far. After starting a ghastly .337 in November, he was up to .426 in January and he's made 12 of his last 25.

- If you're just looking at in-season performance, Korver is the clear leader. He drained a stunning 57% of his three-pointers in January, and his .528 3-point shooting on the season would be the second-best single-year percentage of all time if the season ended today. Not coincidentally, he owns the #1 percentage (2009-10 in Utah, with a .536 average).

- Thompson had the second-hottest January, sinking 49% of his three-point attempts. As a contest newcomer, he's a bit of a wild card here.

- Belinelli has been hampered by injuries all year long, and his .384 mark from long range isn't much to write home about. It's safe to say he wouldn't be here if he wasn't the defending champ, but he's a confidence player who can absolutely hang with these guys if he gets hot.

- Matthews has been very consistent over the course of the season, and the shootout champ always tends to be someone consistent who flew under the radar up to that point (Larry Bird excepted).

With all that in mind...here's how we see the contest going down:

8. Redick (held out by team due to injury)