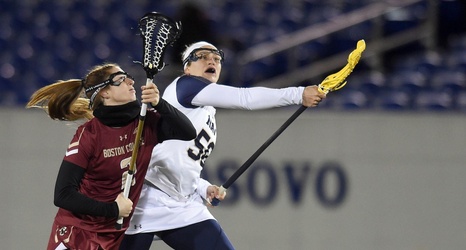 When the whistle blew, Roelofs and VanThof both reacted instantaneously and the ball sailed high into the air.

Roelofs leaped and narrowly out-reached VanThof to snag the ball out of midair then carried it into the offensive zone. While Navy settled things and began to run its offense, Roelofs raced back toward midfield and handed her stick to line defender Marie Valenti, receiving a different stick in return.

Valenti then trotted over to the sideline and exchanged the stick she had just gotten from Roelofs for her own.