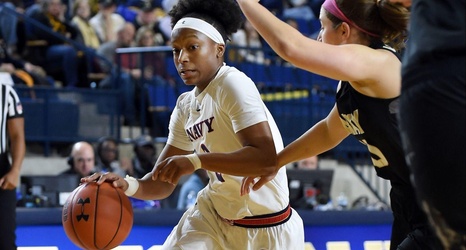 At this time last week, Navy women’s basketball seemed certain of playing a first round game in the friendly confines of Alumni Hall.

Then everything fell apart.

Standout freshman Jennifer Coleman fouled out and the Midshipmen suddenly could not score during last Saturday night’s last home game.

After trailing for the entire contest, Loyola held Navy without a point for most of the last four minutes and pulled out an improbable 55-50 victory – spoiling the final home game for senior Bianca Roach.

Despite the disappointing defeat, the Midshipmen still held the eighth seed for the Patriot League Tournament going into the final game of the regular season.