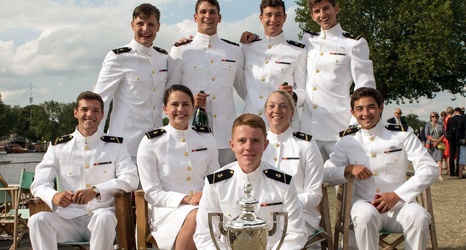 HENLEY-ON-THAMES, England – The 2019 Henley Royal Regatta closed with great excitement on Sunday as a United States service academy crew went head-to-head with the German Bundeswehr team in the championship final of the King's Cup trophy event.

After wins over Canada and France in the first two rounds of the King's Cup knock-out competition, the Naval Academy heavyweight, lightweight and women's programs found themselves in a memorable contest against the highly-regarded German squad.

At the completion of an ultra-competitive race, the Midshipmen came out on top by three-quarters of a boat length over the Germans.