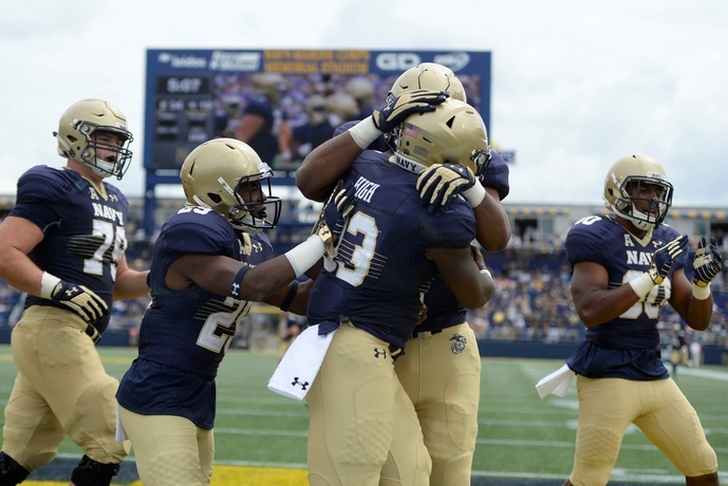 The #6 Houston Cougars looked like they were on pace to potentially crash the College Football Playoff party, but those dreams are now dashed after a 46-40 upset loss to Navy.

Both sides traded scores throughout the first half, and they went into halftime tied 20-20. However, Navy took over at the start of the third quarter thanks to come miscues from Houston.

The Cougars fumbled on the first drive of the second half, and that led to a Navy touchdown. On the ensuing possession, Houston quarterback Greg Ward Jr. was intercepted by Josiah Powell, who returned it 34 yards for the touchdown:

Josiah Powell's pick-six has helped #Navy build a big lead over #Houston. Looks like No. 6 is going down! pic.twitter.com/g4HNl3xm77

Suddenly, the Midshipmen were up two touchdowns, a lead they would never give back. Houston appeared to be mounting a comeback on several occasions in the fourth quarter - only to be shut down by a blocked extra and a safety (which occurred on a bad snap during a punt attempt).

The biggest reason Navy was able to pull the upset was their ability to run the ball against Houston's stout defense. The Cougars came into this afternoon allowing just 42 rushing yards per game, but were unable to slow Navy's triple-option attack. The Midshipmen gashed them for 304 yards on the ground, allowing them to control the clock while keeping Houston's high-powered offense on the sidelines and out of rhythm.

Houston - sure to tumble down the standings - returns home next Saturday to take on Tulsa. Navy - who's only conference loss since joining the American Athletic Conference came last year to Houston - hits the road to take on ECU on Thursday.