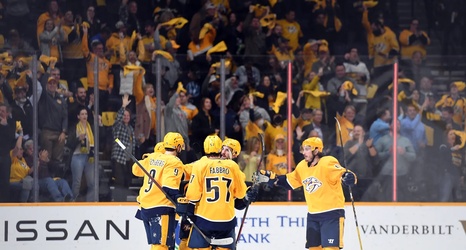 The Nashville Predators returned home after a statement win at the Xcel Energy Center to take on the San Jose Sharks, who had gotten off to a strong start to their season.

The Preds, however, were the ones to get out to a strong start this game. Juuse Saros was back in net, and Eeli Tolvanen returned to the lineup after leaving Sunday night’s game hurt after getting boarded. Matt Benning and Mark Borowiecki returned on the third defense pairing.

Roman Josi drew a tripping penalty a minute in, with his former teammate Nick Bonino heading to the penalty box for the Sharks, and then set up Matt Duchene for a power-play goal seconds after that.