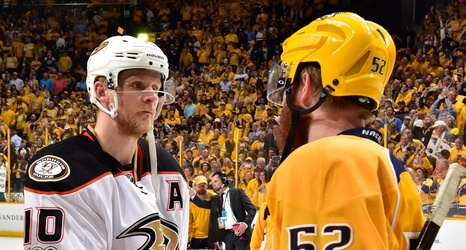 We’re starting off SBNation’s Rivalry Fortnight with a staff roundtable about our least-favorite teams and the Predators’ hottest rivalries—and the places those two overlap.

It’s hard for me to pick a “rival” of Nashville that I detest. Back in the day, it was always Detroit. That’s before they reorganized the divisions, but Saturday nights in Nashville against Detroit were always absurdly rowdy, loud, and rough.

Today, it’s probably a team Nashville faces on a semi-regular basis. You can’t really say they are rivals with Pittsburgh...even after the 2017 Cup Final. You can, however, make a case for a Nashville-Chicago rivalry or a Nashville-Anaheim rivalry.