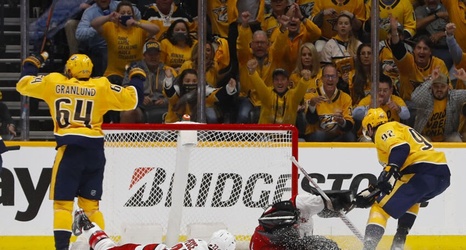 Mikael Granlund #64 of the Nashville Predators celebrates after a goal by teammate Ryan Johansen #92 against the Carolina Hurricanes during the second period in Game Six of the First Round of the 2021 Stanley Cup Playoffs at Bridgestone Arena on May 27, 2021 in Nashville, Tennessee. (Photo by Frederick Breedon/Getty Images)

Despite having the cap space to pull off a major free agency addition, the Nashville Predators have been mainly frugal with their offseason free agency transactions so far.

It’s something this franchise couldn’t push away any longer, and now it appears they’re embracing that by retaining some important young players, while also avoiding another long-term contract that could blow up in their face.