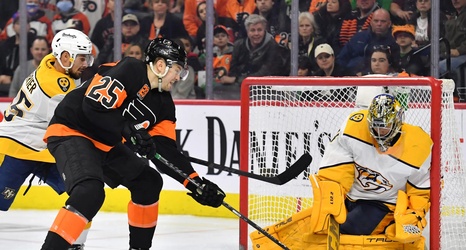 The Nashville Predators faced off against the Philadelphia Flyers tonight on the road in a game with playoff significance to the Preds and emotional significance to the Flyers—team captain Claude Giroux was playing his 1000th game in the middle of a haze of trade speculation.

The Preds got off to a strong start with a great chance from Filip Forsberg, but the Flyers responded in kind. Both goalies were tested early. The lively back-and-forth exchange of chances and saves paused seven minutes into the period, as Michael McCarron and Zack MacEwan exchanged punches at center ice at the faceoff after the first commercial break, with McCarron getting the worse of the exchange.