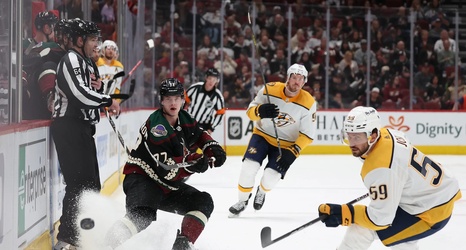 The Nashville Predators took on the Arizona Coyotes tonight, pushing to secure the WC #1 spot and control their own fate heading into the playoffs. The Dallas Stars were facing an emergency backup goalie in Anaheim and holding a third-period lead, leaving the Preds with a game they had to win if they wanted the advantage. Mattias Ekholm, meanwhile, was out for maintenance, leaving Jeremy Davies to slot back into the lineup.

Colton Sissons got the scoring off with a goal 25 seconds into the game. Philip Tomasino had another chance a minute and a half later, and while he missed, Ryan Johansen was able to collect the puck and put it past Karel Vejmelka for a two-goal lead with 2:06 elapsed.