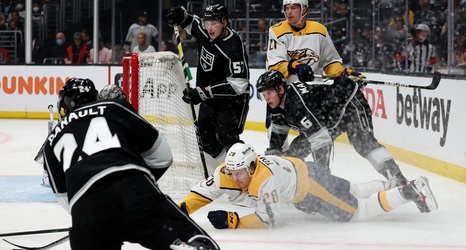 The Nashville Predators went from Anaheim to LA to take on the Los Angeles Kings tonight, and it started off about as badly as the road team and its fans could have feared.

After an early, exploratory back-and-forth, the Kings drew first blood less than four minutes into the game, with Adrian Kempe scoring another goal and Anze Kopitar adding another point. Colton Sissons was goaded into taking a cross-checking penalty against Gabriel Vilardi, and as the Predators tried to kill the penalty Vilardi drew another penalty, this one by Mikael Granlund. With Jonathan Quick still on his way to the bench for the extra attacker, rookie Arthur Kaliyev scored to put the Kings up 2-0.