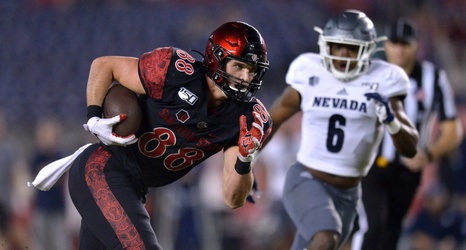 The John Mackey Award is given out to the nation’s most outstanding tight end. The preseason watch list was announced late last week and included San Diego State’s junior Daniel Bellinger. There were only two other Mountain West athletes selected, Boise State’s John Bates and Colorado State’s Trey McBride.

Unlike many of the other players on the watch list, Daniel makes it almost entirely on projection. 2019 was his only season with real playing time, reeling in 15 receptions for 201 yards and 3 touchdowns. He split time with senior Parker Houston who received the lion's share of the targets a year ago.