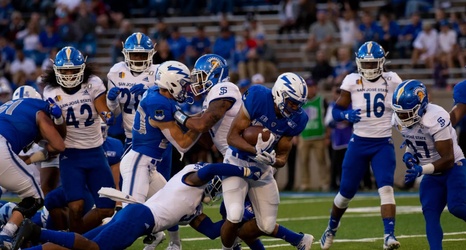 The long-awaited opening day of the Mountain West season will see the Falcons travelling to San Jose for a 7:30 pm Pacific time kickoff, assuming that the California governor and local government will allow the game to be played there. The Spartans have been practicing at Humboldt State University, 320 miles north of their campus in San Jose, and have had less than a month to prepare for the season. The Falcons head to California coming off a season opening win against Navy, 40-7, and with three weeks off to prepare for the game.

Last year against the Spartans

The Falcons won last year’s game against the Spartans at Falcon Stadium, 41-24.