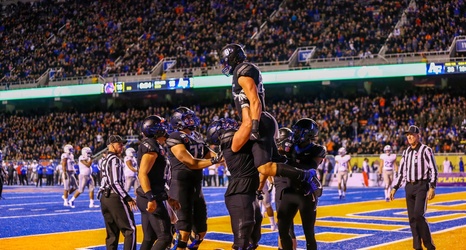 The Boise State Broncos hosted the Air Force Falcons on Friday night in front of the sixth largest crowd in Albertsons Stadium. The Broncos offense struggled early on, but a disciplined defense kept them in the game until the offense started clicking. The Broncos came away with a 30-19 victory, let’s revisit how they got it done.

Will the defense come out strong?

The answer to this question is finally yes. The Boise State defense did a terrific job keeping the Falcons in front of them and limiting their big plays. Schmedding had a heck of a game plan, and Sonatane Lui (16 tackles) and Khafari Buffalo (11 tackles) had a huge game.