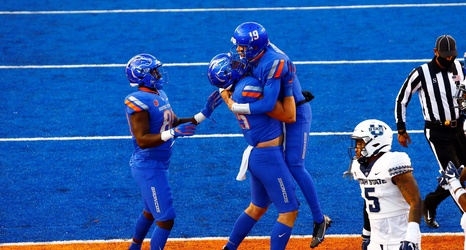 Football finally returned to The Blue on Saturday night. In a game unlike any before it, the Broncos opened the delayed 2020 college football season with a 42-13 thrashing of the Utah State Aggies. Even with no fans in the normally deafening Albertsons Stadium, and a stilted practice and preparation schedule, Boise State looked like Boise State from the open kickoff.

Boise State opened the scoring on their second drive of the game. The 9 play 79-yard scoring drive featured Hank Bachmeier at his best, going a perfect 4-4 for 49 yards, and showcased the ever-growing talent of Sophomore running back George Holani who scored on a one-yard run to give the Broncos a lead they would never relinquish.