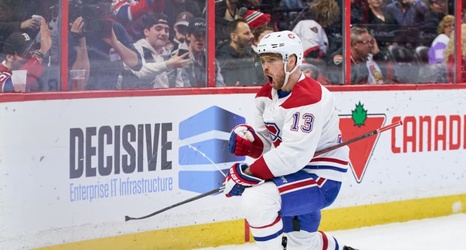 OTTAWA, ON - FEBRUARY 22: Max Domi #13 of the Montreal Canadiens celebrates his first period goal and second of the game against the Ottawa Senators at Canadian Tire Centre on February 22, 2020 in Ottawa, Ontario, Canada. (Photo by Jana Chytilova/Freestyle Photography/Getty Images)

The Montreal Canadiens are scheduled to get back to training camp in a couple weeks. Max Domi will have a very difficult decision to make at that time.

The Montreal Canadiens haven’t played a game in over three months. At that time they appeared to have almost zero chance of making the playoffs and were just playing out the string on another non playoff season.