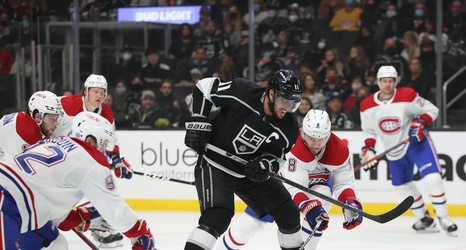 Thanks in large part to Jake Allen, the Montreal Canadiens headed into a weekend back-to-back on a winning note. His 45 saves were critical in ending his team’s long drought in San Jose, though four goals of support helped a great deal as well. Having multiple reasons for getting a rare win in the 2021-22 season had to have the team feeling good when it hit the ice for an afternoon game versus the Los Angeles Kings and former top-line centreman Phillip Danault.

They clearly didn’t feel quite as good as L.A., because the Kings came out with a couple of shots right off the drop of the puck, but the Canadiens slowly started to find their form after some sloppy neutral-zone play and close offside calls.