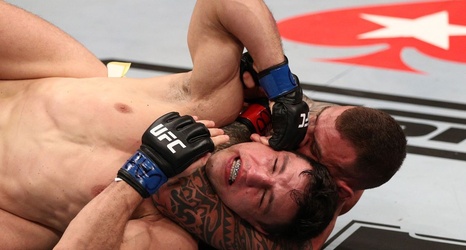 It only took 44 seconds for Renato Moicano to get the job done against Damir Hadzovic at UFC Brasilia. But even after a submission win via rear-naked choke in his return to lightweight, Moicano remained fired up towards his defeated opponent.

The two later shook hands and made amends right before Moicano went on the mic with Michael Bisping for his Octagon interview. And according to the Brazilian, his aggression came from wanting to fight a little longer.

“Then you shouldn’t have submitted me,” Hadzovic said in response.

As he explained to Bisping, Moicano was left frustrated about having no fans around for his first fight in Brazil in nearly four years.