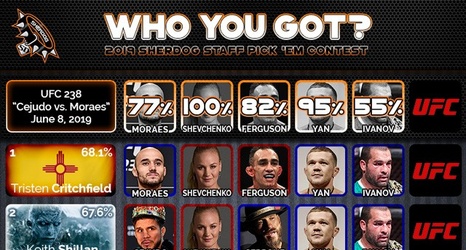 Welcome back to Sherdog's Staff Pick 'Em League, where we will attempt to pick up the pieces after a disastrous showing in Stockholm last week. The league as a whole scored a miserable 31 percent on UFC Fight Night 153, our worst collective performance of the season so far. However, that did not prevent our resident maverick mystic, Ed Carbajal, from picking up his third Super Cojones Award of the year -- Ed was the only one of us to pick Christos Giagos to defeat Damir Hazdovic. (For those keeping track at home, the rest of the league combined has two Super Cojones awards.