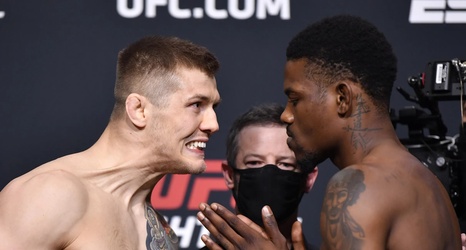 Join us today on Bloody Elbow for live results, discussion, round scoring, and full play-by-play as UFC Vegas 23: Vettori vs. Holland goes down at the Apex in Las Vegas.

The headliner comes in the middleweight division, as Marvin Vettori takes on Kevin Holland in a five-rounder. Originally, Vettori was supposed to face Darren Till but TIll withdrew due to injury, so Holland is fighting for the second time in three weeks. Hopefully this is much better than his performance against Derek Brunson.

In the co-main event, England’s Arnold Allen takes on Nigeria’s Sodiq Yusuff in a battle between promising featherweight prospects.